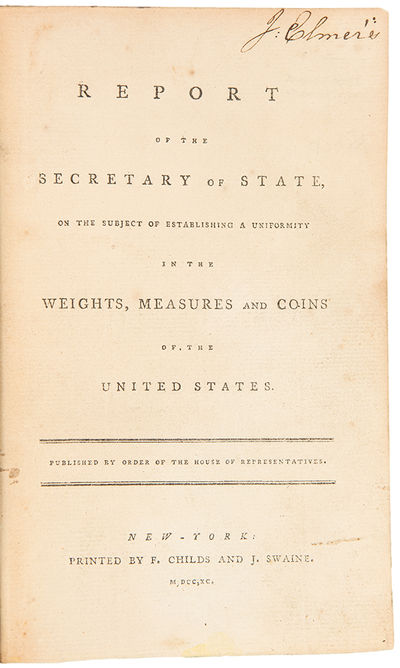 by JEFFERSON, Thomas (1743-1826)
New York: F. Childs and J. Swaine, 1790. 8vo. (7 7/8 x 4 7/8 inches). 49, [3, blank]pp. Expertly bound to style in half tree sheep and marbled paper covered boards. Housed in a full blue morocco box. Provenance: J. Elmer (early signature) First edition, fourth and final issue of the landmark report. This report, the influence of which is still felt in the daily lives of all Americans, is a primary document in the establishment of the federal government and in the implementation of Jefferson's ideas concerning science and government. This issue of the report is the one Jefferson kept in his own library, and represents the final version produced under his supervision. Jefferson had long pondered the difficulties of establishing uniform weights and measures, and the desirability of doing so. Colonial America had struggled with a multiplicity of measures borrowed from Europe, few of them based on rational systems. Jefferson felt that commerce would be greatly aided by having a single standard, that politically it would serve to bind the nation together as a unit with similar measures, and that invention would be encouraged by uniformity in standards. He also felt strongly that a decimal-based system would make transactions easier for less educated persons, and thus be more democratic. As the editors of the Jefferson Papers put it, "Jefferson's report on weights and measures is an almost perfect embodiment of his dual allegiance to Newtonian physics and to Lockean concepts of government." Jefferson had considered the problems of standard currency as early as 1782. In 1784 he wrote a pamphlet on the topic, entitled Notes on the Establishment of a Money Unit, incorporated as an appendix with the privately-printed first edition of Notes on the State of Virginia. He and Madison corresponded frequently on the larger issue of weights, measures, and standards from 1785 on. It was a topic he was eager to take on when the House of Representatives asked him to prepare a report on the problem on Jan. 15, 1790. Working with Tench Coxe, David Rittenhouse, and James Madison, he developed the concept of a single, integrated system based on decimal calculation. According to the editors of the Jefferson Papers, it was "...a thoroughly radical departure: indeed it is doubtful whether a reformation of similar extent, in comprehensive fullness and explicitness, has ever been similarly reduced to the brevity of two small sheets of paper [in the manuscript draft]." The Report was delivered to the House of Representatives on July 13, 1790, and immediately ordered to be printed. The first three impressions were printed in a folio format, the different issues stemming from corrections made while in press. The final version was printed by Childs & Swaine in this octavo, forty-nine-page format, and it is this version that Jefferson chose to retain in his own library. Rink locates six copies of this issue, including Jefferson's own at the Library of Congress. While Jefferson's full recommendations were never implemented, much of his report was adopted, and his ideas on decimal measures form the basis for American standards of currency and other basic measures. This report remains one of the clearest expressions of his extraordinary ability to conceive of ways for government to rationally order the world, and remains his most celebrated written contribution as Secretary of State. This was the plan, the editors of the Jefferson Papers write, which one would have expected "of the pen that produced such revolutionary documents as the Declaration of Independence and the Virginia Statute of Religious Freedom." With provenance to Jonathan Elmer (1745-1817), who served as a Federalist Senator from New Jersey from 1789-1791. Evans 22997; Sowerby, Jeffersons Library 3760; Jefferson Papers 16: 602-75; Rink 877; ESTC W15309. (Inventory #: 37857)
$20000.00 add to cart or Buy Direct from
Donald A. Heald Rare Books
Share this item
Donald A. Heald Rare Books
Offered by