Caught In A Trap; The Result of the Third-Term Hoax 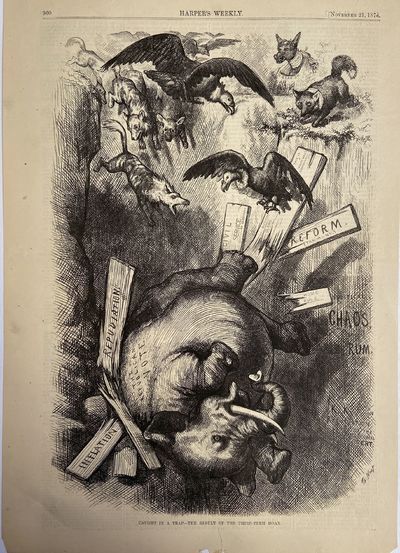 by NAST, Thomas; HARPER'S WEEKLY
New York: Harper's Weekly, 1874. unbound. Woodcut. Page measures 16 3/8" x 11 1/2". A full page political cartoon referencing the midterm elections of 1874. The image shows an elephant, representing the Republican party, falling into a trap. The cartoon was published as a sequel to a previous image published on November 7, and is one of the first cartoons to use the elephant as a Republican symbol.From the November 21, 1874 edition of Harper's Magazine, page 960. Minor chip and tea to lower margin. Thomas Nast was a political cartoonist and illustrator; credited with devising elephant and donkey symbols of Republican and Democratic parties, and with creating American image of Santa Claus. He largely featured Catholicism and the papacy in Rome, Irish-Americans, and corrupt Democratic politicians (namely Boss Tweed and the Tammany Hall institution). This is a great example of his work. (Inventory #: 294414)
$100.00 add to cart or Buy Direct from
Argosy Book Store
Share this item

The Story of Eleanor Roosevelt

by HICKOK, Lorena A.