If I Ran the Zoo. 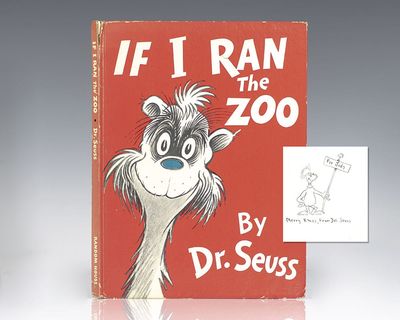 by Seuss, Dr. (Theodor Geisel)
New York: Random House, 1950. First edition of Dr. Seuss's Caldecott Honor classic work. Quarto, original illustrated boards. Presentation copy, inscribed by the author opposite the title page who has drawn a large figure, "For Judy Merry Xmas Dr. Seuss." In near fine condition. If I Ran The Zoo is written in anapestic tetrameter, Seuss's usual verse type, and illustrated in Seuss's pen-and-ink style. It tells the story of a child named Gerald McGrew who, when visiting a zoo, finds that the exotic animals are "not good enough". He says that if he ran the zoo, he would let all of the current animals free and find new, more bizarre and exotic ones. Throughout the book he lists these creatures, starting with a lion with ten feet and escalating to more imaginative (and imaginary) creatures, such as the Fizza-ma-Wizza-ma-Dill, "the world's biggest bird from the island of Gwark, who eats only pine trees, and spits out the bark." The illustrations also grow wilder as McGrew imagines going to increasingly remote and exotic habitats and capturing each fanciful creature, bringing them all back to a zoo now filled with his wild new animals. He also imagines the praise he receives from others, who are amazed at his "new Zoo, McGrew Zoo." If I Ran the Zoo is often credited with the first printed modern English appearance of the word "nerd," although the word is not used in its modern context. It is simply the name of an otherwise un-characterized imaginary creature, appearing in the sentence "And then, just to show them, I'll sail to Ka-Troo And Bring Back an It-Kutch, a Preep, and a Proo, A Nerkle, a Nerd, and a Seersucker too!" (Inventory #: 109540)
$8,200.00 add to cart or Buy Direct from
Raptis Rare Books
Share this item