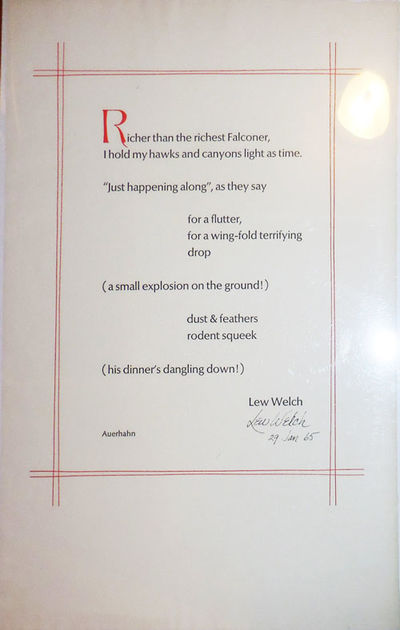 by Welch, Lew
San Francisco: Auerhahn Press, 1965. First Edition. Loose Sheets. Near Fine. Broadside poem from early in the poet's career. According to Lepper, this is Welch A4. One of only 50 unnumbered copies. Perhaps the scarcest of the Welch broadsides. 40 x 25 cm. A lovely near fine example. This copy has been SIGNED by Welch (also dated 29 January 1965) and is virtually unheard of as such. Seven copies located in institutional hands, but none are signed. (Inventory #: 28677)
$1500.00 add to cart or Buy Direct from Derringer Books
Share this item
Derringer Books
Offered by

Looking At The Dance; More than a decade of dancing - from the Ballet to Broadway - as seen by America's foremost dance critic

Old Pewter Its Makers and Marks in England, Scotland and Ireland