A Briefe Treatise of Testaments and Last Willes, Very Profitable.. 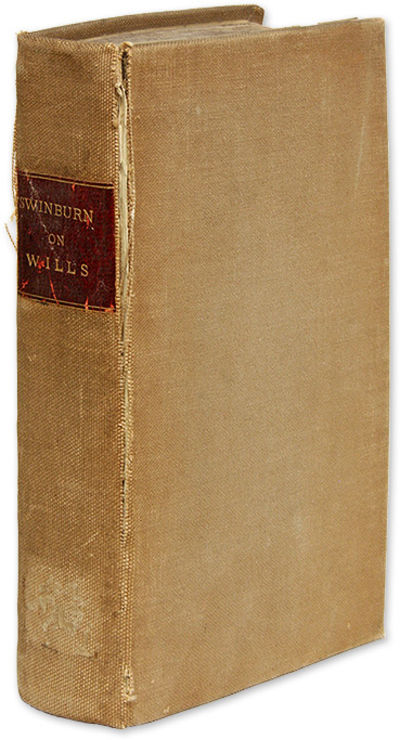 by Swinburne, Henry
1590. Beale T498. Beale T498. First Edition of the First Standard Treatise on Wills Swinburne, Henry [1560?-1623]. A Briefe Treatise of Testaments and Last Willes, Very Profitable to be Understoode of All the Subjects of This Realme of England, (Desirous to Know, Whether, Whereof, And How, They May Make Their Testaments: And by What Meanes the Same May be Effected or Hindered,) And no Lesse Delightfull, Aswell for the Rareness of the Worke, As for the Easines of the Stile, And Method: Compiled of such Lawes Ecclesiasticall and Civill, As be Not Repugnant to the Lawes, Customes, Or Statutes of this Realme, Nor Derogatorie to the Prerogative Royall. In which Treatise Also are Inserted Divers Statutes of this Land, Together with Mention of Sundrie Customes, As Well General as Particular, Not Impertinent Thereunto: Besides Divers Marginall Notes, And Quotations Not to be Neglected, Especially of Iustinianists, Or Young Students of the Civil Law: With Two Tables, The One Analytical, Describing the Generall Order of the Whole Treatise: The Other Alphabeticall, Disclosing the Particular Contents Thereof: That in the Beginning; This in the End of the Booke. London: Printed by Iohn Windet, 1590 [colophon date 1591]. [xii], 293, [14] ff. Errata leaf present. As in many copies, our copy lacks the pasted one-word slip-cancel on Leaf K5r (Fol. 65) (changing "whether" to "where"). Quarto (7-1/2" x 5-1/2"). Later library cloth, calf lettering piece and residue from paper location label to spine, endpapers added. Light soiling, joints starting, text block neatly detached. Moderate toning to text, light soiling in places, early owner signature and initials and later library stamp to title page, small library mark to verso. $750. * First edition. The testamentary jurisdiction of ecclesiastical law was a separate branch that produced its own literature. From the sixteenth until well into the seventeenth century Swinburne's was the standard treatise on this subject. Holdsworth, who cites it often and considers it "the most practically useful book of [its] period" notes that "it is a very useful summary of the law as to wills and executors as administered in the ecclesiastical courts.": A History of English Law V:14. English Short-Title Catalogue S118058. Beale, A Bibliography of Early English Law Books T498. (Inventory #: 70893)
$750.00 add to cart or Buy Direct from
Lawbook Exchange
Share this item

by Justinian I, Emperor of the East; Holoander, Greg