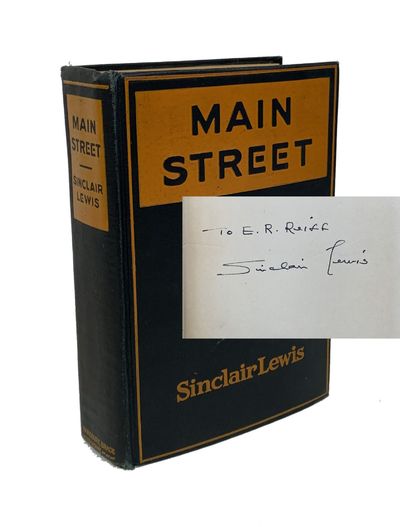 by Lewis, Sinclair
New York: Harcourt, Brace and Howe, 1920 First edition with "49" perfect, "54" slightly battered and "y" in "may" imperfect. Presentation copy, signed and inscribed by Lewis on the front endpaper. Publisher's dark blue cloth, stamped in orange. About near fine, with some light wear to the spine ends, light rubbing, and a slight lean to the spine. Pastore 7. Main Street is the novel that established Sinclair Lewis' literary reputation and was his first commercial success. Inspired by Lewis' childhood in Sauk Centre, Minnesota, it criticizes romantic notions of small town life in the United States. Specifically, Main Street tells the story of Carol Kennicott, who moves to Gopher Prairie, a fictional, sleepy town that the heroine pledges to modernize and rejuvenate in spite of the residents' resistance. In his preface, Lewis explains that Gopher Prairie is meant to symbolize all small American towns, writing that "Its Main Street is the continuation of Main Streets everywhere. The story would be the same in Ohio or Montana, in Kansas or Kentucky or Illinois, and not very differently would it be told Up York State or in the Carolina hills." Notably, Main Street is a satire not only on the ignorant simplicity of small town living but on the superficial intellectualism of those who criticize it. Similarly, its successor, Babbitt (1922), parodies urban life in America in the 1920s.. Signed by Author. First Edition.. Hard Cover. Near Fine. (Inventory #: SL017)
$1,250.00 add to cart or Buy Direct from
B & B Rare Books
Share this item

The Fire Next Time

New York: The Dial Press , 1963
(click for more details about The Fire Next Time)

London: The Crime Club for Collins, , 1945
(click for more details about Sparkling Cyanide)
View all from this seller>