GREGORY'S EXPRESS POCKET LETTER BOOK,; Designed to Facilitate Correspondence Between Cities and Towns, and the Mining Disctricts in California, and All Parts of the United States 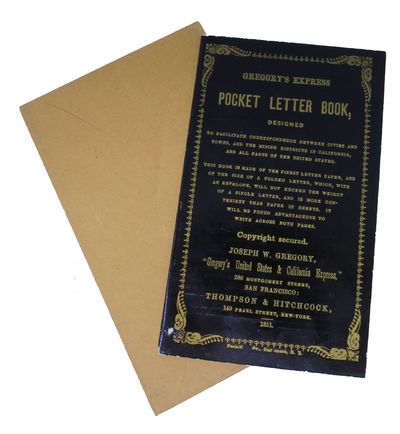 From the inside of the front cover: "Gregory's California Express. This line, one of the oldest established in the business, dispatch messengers BY EVERY STEAMER leaving New-York and San Francisco, in charge of Letters, Parcels, Packages, Gold Dust and valuables, for distribution throughout the United States and California. If possible, letters should be directed to the care of mercantile houses, or well-known residents, in San Francisco or other parts of California, by which means their earlier delivery may be insured. Letters directed simply to 'California,' or 'at the mines,' will not be forwarded, as little probability exists of their reacing the persons so vaguely addressed."From the rear cover: "The Central Office of this Express is located in the throughly fire-proof building, corner of Montgomery and Merchant Streets, San Francisco, from which the proprietor Daily dispatches Expresses by steamboat, to all parts of the Mines, and to Portland, Oregon and Honolulu, Sandwich Islands, on the arrival of ecah steamer with packages from the States."A rare Gold Rush survivor, documenting the 'letter & dispatch' business of the era. (Inventory #: 48314)
$1250.00 add to cart or Buy Direct from Tavistock Books
Share this item

The FIRST SERIES Of The MOUNTAIN, RIVER, LAKE, And LANDSCAPE SCENERY Of GREAT BRITAIN; Comprising a Selection of Sixty Exquisitely Coloured Views of Some of the Most Noted and Picturesque Scenes in England and Wales, Executed in the Highest Style of Art, with Descriptive Letterpress. Volume III