[Archive of Ephemera from a Voyage to Alaska Aboard the Alaska Line, Including Menus and Five Issues of the Shipboard Newspaper, "The Morning Alaskan"] 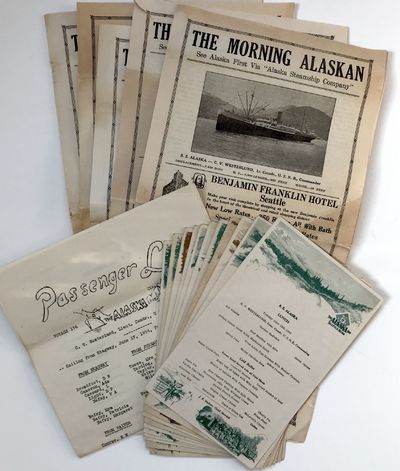 by [Alaska Steamship Company]
[At sea, 1934. Very good.. Five issues of The Morning Alaskan, each 4pp. Also, four leaves of manuscript, four mimeo news sheets, two passenger lists, thirteen menus, and related material. Light wear and chipping to edges of newsletters and news sheets, heavier to news sheets. Light wear overall. A nice archive of ephemera collected during a voyage from Seattle to Alaska aboard the S.S. Alaska. Founded in 1894, the Alaska Steamship Company ran cargo and passenger service to Alaska from Seattle through the mid-1950s, at which point it became a freight-only company until its demise in 1971. The materials here, likely saved from a voyage in June 1934, provide a glimpse into Alaskan cruise tourism during the height of the Great Depression. There are four daily mimeo "news sheets" titled "Sense and Nonsense," which are filled with one-liner inside jokes about the goings-on about the ship: "Mr Sullivan, his own is still holding against all comers, and how!!" and "Who was the boyfriend in Ketchikan, Rose? The flowers, at least, were beautiful." Additionally, thirteen menus for breakfast, lunch, and dinner meals. The shipboard newspaper, The Morning Alaskan, features ads and a vignette of the ship on the first page, followed by a mixture of news and tidbits from locales across the globe. One issue includes news about the dock strike in San Francisco, the reappearance of a missing Japanese Vice Consul in Shanghai, and sports news. It was a fairly sophisticated production, presumably with the first page pre-printed and then the interior mimeographed aboard ship. The manuscript leaves contain brief notes about the voyage. Upon leaving Seattle on June 13, the author made the following notes, providing an insight into the other passengers on the ship: "Six mo. truce made. First boat in 6 mo. (why Eng. boats no help to Alaskans.) Heavy cargo, interesting loading - autos, personal, Bride, soldiers, lecturer, natives, Alaskans going home, prospectors (old men going back), missionaries, teachers, natives, contractors for school projects "nails counted." Orchestra, steward. News Daily - ship personals, sight seeing paper. Food, number of meals & type." He notes stops at Juneau and Hawkes Inlet: "Juneau again. Hawkes Inlet at 9:30 p.m. light. Beautiful. Private homes at most canneries, Gov. visiting Hawkes Inlet came on board." Though brief, his notes do provide interesting details about the voyage. Notably, this archive also highlights possible Chinese migration to Alaska, perhaps for the cannery industry, based on the passenger lists. The northbound passenger list, from Seattle to Skagway on June 14, lists eighty roundtrip passengers, as well as 107 passengers with destinations at various ports along the way, such as Ketchikan, Wrangell, Petersburg, Juneau, and Skagway. It also lists among the passengers sixty "Orientals" and forty-six passengers traveling "Oriental Steerage." At Hawk Inlet, thirty-one "Orientals" disembarked -- no white passengers -- twenty-nine of them traveling steerage. An interesting group of ephemera, made even more interesting by the addition of the Asian-American component in the passenger lists. (Inventory #: 1007)
$500.00 add to cart Available from
McBride Rare Books
Share this item