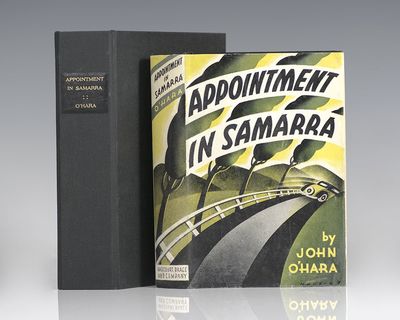 by O'Hara, John
New York: Harcourt, Brace and Company, 1934. First edition of the author's first book. Octavo, original cloth. Fine with a contemporary bookplate to the inner gutter, in the first issue dust jacket. Housed in a custom clamshell box. A very nice example. One of the great novels of small-town American life, Appointment in Samarra is John O'Hara's crowning achievement. In December 1930, just before Christmas, the Gibbsville, Pennsylvania, social circuit is electrified with parties and dances. At the center of the social elite stand Julian and Caroline English. But in one rash moment born inside a highball glass, Julian breaks with polite society and begins a rapid descent toward self-destruction. Brimming with wealth and privilege, jealousy and infidelity, O'Hara's iconic first novel is an unflinching look at the dark side of the American dream--and a lasting testament to the keen social intelligence if a major American writer. "[O'Hara] is the only American writer to whom America presents itself as a social scene in the way it once presented itself to Henry James, or France to Proust" (Lionel Trilling, The New York Times). "If you want to read a book by a man who knows exactly what he is writing about and has written it marvelously well, read Appointment in Samarra" (Ernest Hemingway). Chosen by Modern Library as one of 100 greatest novels of the twentieth century and was placed by Time Magazine's list of top 100 novels written in English since 1923. (Inventory #: 109228)
$4,500.00 add to cart or Buy Direct from
Raptis Rare Books
Share this item