Serve to Win Without a Gun 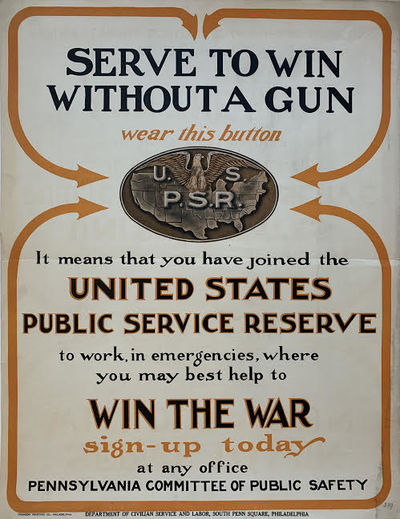 by Department of Civilian Service and Labor
Philadelphia: Thomson Printing Co. Poster. Offset lithograph. 28" x 22". World War II poster advocating for conscientious objectors to serve in the United States Public Reserve. The poster reads: "Serve to Win Without a Gun, wear this button. It means that you have joined the United States Public Service Reserve to work, in emergencies, where you may best help to Win the War, sign-up today at any office Pennsylvania Committee of Public Safety". The Public Service Reserve, also known as the Civilian Public Service, provided conscientious objectors with an alternative to military service during World War II. They worked in fields such as soil conservation, forestry, firefighting, and agriculture. The button depicted shows a map of the continental United States with an eagle and the letters "U.S.P.S.R." This poster offers a peek into life during World War II for pacifists, outside the realm of the violence of the battlefront. (Inventory #: 294674)
$1200.00 add to cart or Buy Direct from
Argosy Book Store
Share this item

His Home Over There; More than 2000 Such Homes for Our Boys. United War Work Campaign November 11-18

Save Food and Defeat Frightfulness; "America, the hope of all who suffer - the dread of all who wrong.

by US Food Administration