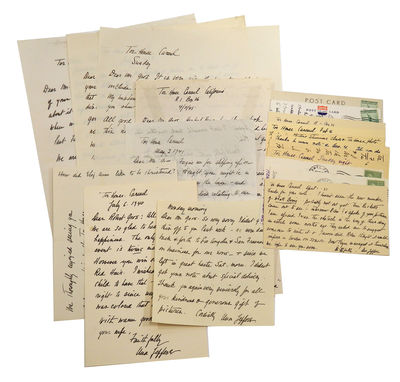 by Jeffers, Una, (Robinson Jeffers)
Tor House, Carmel, California, 1939-1947. Includes two 2-page letters, six half- to full-page letters, and 12 postcards. All are entirely handwritten and quite legible. Nineteen are to Robert Gros; one is to a Mr. Getz (the musician Stan Getz?). They cover a wide range of topics including social events, invitations to visit, acknowledgements for items received, travel plans, WWII concerns for Garth and Donnan, family trips for Robinson's readings, the "new" play (Medea), and Una's medical concerns. Robert R. Gros (1915-1997) was a corporate executive, government adviser on international affairs, active in San Francisco civic affairs, and a lecturer on international relations. He twice rode the military airlift supply operations into blockaded Berlin after World War II, served several U.S. presidents and was personally commended by President Dwight Eisenhower in 1956 for his services to the American Council on NATO. He was a five-time winner of the Freedoms Foundation award for memorable speeches, including "The Winds of Freedom" (1961), and "Freedom's Friends and Foes" (1963). The Jeffers scholar James Karman examined copies of this collection of correspondence in 2007 and said in an email to the collector Allen K. Mears, "Yes they are genuine. There is absolutely no doubt about that." Printout of email included. All are in very good or better condition. (Inventory #: 55917)
$3,750.00 add to cart or Buy Direct from Quill & Brush
Share this item

We accept checks in U.S. dollars, PayPal, and all major credit cards.
More from this seller

Pasadena : The Flame Press , 1930
(click for more details about STARS)
View all from this seller>