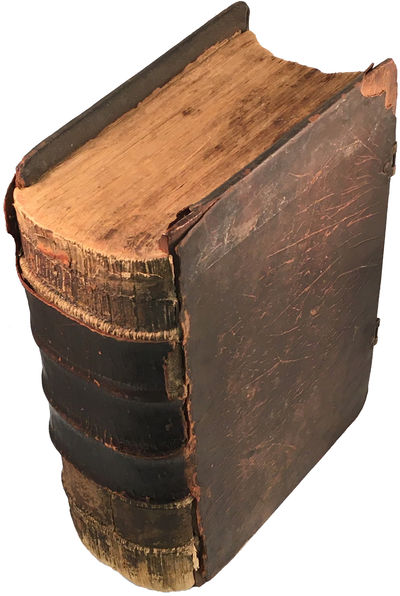 by [Bible]
Germantown, PA: Christoph Saur, 1763. Second edition. Hardcover. Fair. Large 4to. 5-992, [3], 4-277, [1] pp. Printed in German Gothic type. Full leather calf, spine in six compartments, two metal clasps remain on the front board, volume lacks the straps and the clasps on the rear board. Based on Martin Luther's 34th Halle edition of the Bible. Includes the Old and New Testament, the Psalms, Apocryphal Books 3 and 4, Books 1 and 2 of Ezra, and Book 3 of Maccabees from the Berleburg Bible. The second edition, printed by Christopher Saur II, the first edition having been published in 1743. Saur's family immigrated to Pennsylvania from Westphalia in 1724. Saur and his father advocated for Quaker causes via their printing activities in Pennsylvania. Saur was in charge of the bindery and of English language publications at his father's business. After his father's death, Saur II continued to publish their newspaper, their almanacs, and their religious books (bibles and hymnals, etc.). In 1773 Saur the II established a paper mill on the Schuylkill River, which would greatly increase his wealth and standing in British America. However, because of his later reluctance to participate in the American Revolution (due to his Quaker beliefs), Saur would have his house and properties sold off, and died poor. This is the first Bible printed in any European language in the Continental United States. The 1763 edition eliminated Saur I's postface and included a new Foreword. 2,000 copies of this second edition were printed. ADNB "Sower, Christopher, (September 1721-26 August 1784)". Evans Vol 3., 9343. Hildeburn 382. Strand, Kenneth, "Saur German Bibles", Andrews University Studies, Spring/Summer 1994, Vol. 32, Nos. 1-2, 57-106. A Fair only example with significant loss to the spine and leather on the boards, exposing the gatherings and the wood of the boards; lacks the first title page, the free front endpaper, the foreword, the table of contents, and the first page of the Old Testament; leaves show some dampstains and a few tiny tears. (Inventory #: 00008790)
$2,000.00 add to cart or Buy Direct from
Evening Star Books
Share this item

All items subject to prior sale.ï¿½ Certain items and shipping to certain countries may exceed the standard shipping amounts.ï¿½ Any shipping expenses incurred above the standard rate will be billed at cost. Payment is in US dollars.ï¿½ Personal checks must clear prior to shipment (please allow 10 days).ï¿½ Books may be returned within 30 calendar days of delivery for any reason, so long as we are notified of return within 10 days of delivery.ï¿½ Return items must be well packaged and fully insured and must be returned in same condition as sold. Any book described as a First Edition is also a First Printing unless otherwise indicated.
More from this seller