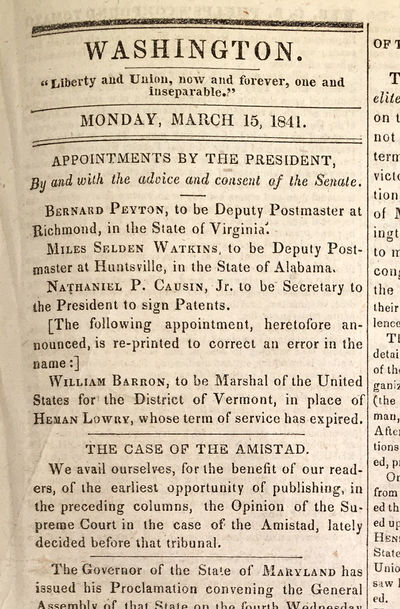 by [AMISTAD]
The story of La Amistad, its dramatic capture by Africans aboard, and the resulting lawsuits gained international attention from 1839 to 1841. Abolitionists rallied to the cause of freeing the Africans transported illegally across the Atlantic into Spanish slavery, while proslavery advocates saw the case as an assault on property rights. This issue presents the opinion of the U.S. Supreme Court on the case, starting on the front page. [AMISTAD].
Newspaper. Daily National Intelligencer, March 15, 1841. Washington, DC: Joseph Gales and William W. Seaton. 4 pp.

Excerpts From Associate Justice Joseph Story's Opinion for the Court:

"It is also a most important consideration in the present case, which ought not to be lost sight of, that, supposing these African negroes not to be slaves, but kidnapped and free negroes, the treaty with Spain cannot be obligatory upon them, and the United States are bound to respect their rights as much as those of Spanish subjects. The conflict of rights between the parties under such circumstances becomes positive and inevitable, and must be decided upon the eternal principles of justice and international law. If the contest were about any goods on board of this ship, to which American citizens asserted a title, which was denied by the Spanish claimants, there could be no doubt of the right of such American citizens to litigate their claims before any competent American tribunal, notwithstanding the treaty with Spain. A fortiori the doctrine must apply where human life and human liberty are in issue, and constitute the very essence of the controversy. The treaty with Spain never could have intended to take away the equal rights of all foreigners, who should contest their claims before any of our courts, to equal justice, or to deprive such foreigners of the protection given them by other treaties, or by the general law of nations. Upon the merits of the case, then, there does not seem to us to be any ground for doubt that these negroes ought to be deemed free, and that the Spanish treaty interposes no obstacle to the just assertion of their rights." (p2/c1)

"Upon the whole, our opinion is that the decree of the Circuit Court affirming that of the District Court ought to be affirmed, except so far as it directs the negroes to be delivered to the President to be transported to Africa in pursuance of the act of the 3d of March, 1819; and, as to this, it ought to be reversed, and that the said negroes be declared to be free, and be dismissed from the custody of the Court, and go without day." (p2/c2)

When La Amistad ("Friendship"), a Spanish ship, left Havana, Cuba, on June 27, 1839, it carried 53 enslaved Africans for a four-day voyage to another part of Cuba. Contrary winds slowed the voyage, and Cinqué freed himself and the other captives on July 2. The Africans killed the ship's captain and the cook, while two sailors escaped in a lifeboat, and two Africans were also killed. The remaining Africans kept two Spanish sailors alive to navigate the ship and a creole to be an interpreter, with the goal of returning to Africa. Instead, the crew deceived the Africans and steered the ship to the East Coast of the United States. On August 26, 1839, the U.S. Revenue Cutter Service ship Washington discovered the vessel off the eastern coast of Long Island, New York. Lieutenant Thomas R. Gedney, the commander of the USRCS Washington, took custody of La Amistad
and the Africans and took them to New London, Connecticut, where he presented a claim for his property rights in the salvage of the ship and cargo, including the slaves, under admiralty law. Gedney allegedly chose to land in Connecticut rather than New York because slavery was technically still legal in Connecticut.

Many parties claimed the ship and its cargo of goods and slaves, including Lieutenant Gedney, the two Spanish crewmembers, the U.S. Attorney for the District of Connecticut on behalf of the Spanish government, the Africans, and others who claimed goods or individual slaves onboard. The British government, eager to suppress the international slave trade, exerted pressure on the United States to release the Africans, while the Spanish government insisted that only a Spanish court should consider the case. Meanwhile, American abolitionists formed the "Amistad Committee," led by New York merchant Lewis Tappan, to raise money to defend the Africans. The abolitionists charged the Spanish sailors with assault, kidnapping, and false imprisonment, and they were arrested in New York City in October 1839, outraging proslavery advocates and the Spanish government. Both posted bond and left for Cuba.

On January 7, 1840, all the parties appeared before the U.S. District Court for the District of Connecticut to present their arguments. The abolitionists argued that the Africans had been seized on the west coast of Africa and brought to Cuba in a Portuguese ship in violation of international treaties against the transatlantic slave trade. Democratic President Martin Van Buren, concerned about the relationship with Spain and unwilling to alienate southern voters, favored the Spanish position that the Africans be returned to Cuba. However, the district court ordered that the Africans be delivered to the custody of the President for return to Africa, awarded one-third of La Amistad and its cargo to Lieutenant Gedney as salvage, awarded another third to Spanish merchants with claims to some of the cargo, and ordered the slave Antonio returned to Cuba as the personal property of the vice-consul of Spain. The U.S. Attorney in Connecticut, by order of President Van Buren, immediately appealed to the U.S. Circuit Court. In April 1840, the Circuit Court upheld the district court's decision, and the U.S. Attorney appealed the United States Supreme Court.

The Supreme Court heard oral arguments in February and early March 1841. Attorney General Henry D. Gilpin (1801-1860) argued that the Africans were slaves and should be returned to Spanish authorities in Cuba. Roger Sherman Baldwin (1793-1863) and former President and current Congressman John Quincy Adams (1767-1848) represented the interests of the Africans. On March 9, Associate Justice Joseph Story (1779-1845) delivered the opinion of the Court that upheld the decision of the U.S. district and circuit courts except for the fate of the Africans. Instead of turning them over to the President to be returned to Africa, they were to be freed immediately. Associate Justice Henry Baldwin of Pennsylvania dissented without comment, and Associate Justice Philip P. Barbour took no part in the discussion or decision of the case.

Abolitionists took the survivors, thirty-six men and boys and three girls, to Farmington, Connecticut, where they stayed while supporters raised funds for their return to Africa. In 1842, the Africans sailed to Sierra Leone, along with several missionaries who constructed a mission in Mendiland. Although southern members of Congress and Presidents James K. Polk and James Buchanan sought to compensate the Spanish government for La Amistad, its cargo and slaves, the majority in Congress refused to pass such legislation.

This issue also includes a report of the adjournment of the Baltimore Convention of Whig Young Men, who had committed in 1840 to elect Harrison to the Presidency (p3/c2); news of a steamboat disaster in Florida (p3/c2); a defense by former Vermont governor Cornelius P. Van Ness against charges by Congressman Richard Hawes of Kentucky of improprieties when Van Ness was minister to Spain (p3/c3); a report about a lecture by Henry C. Whitman on education (p3/c4); and several notices and advertisements, including the Tippecanoe Club satirically offering to sell a log cabin on the Centre Market Space, which had to be removed by the end of the week (p1/c3) The log cabin was a central symbol of William Henry Harrison's successful presidential campaign in 1840, meant to emphasize that he was a man of the common people.

National Intelligencer (1800-1870) was a prominent newspaper published in Washington, DC. In 1800, Thomas Jefferson, then vice president and a candidate for the presidency, persuaded Samuel Harrison Smith, the publisher of a Philadelphia newspaper, to open a newspaper in Washington, the new capital. Smith began publishing the National Intelligencer, & Washington Advertiser
three times a week on October 31, 1800. In 1809, Joseph Gales (1786-1860) became a partner and took over as sole proprietor a year later. From 1812, Gales and his brother-in-law William Winston Seaton (1785-1866) were the newspaper's publishers for nearly fifty years. From 1813 to 1867, it was published daily as the Daily National Intelligencer
and was the dominant newspaper of the capital. Supporters of the administrations of Thomas Jefferson, James Madison, and James Monroe, Gales and Seaton were the official printers of Congress from 1819 to 1829. From the 1830s to the 1850s, the National Intelligencer was one of the nation's leading Whig newspapers, with conservative, unionist principles. (Inventory #: 25678)
$1,900.00 add to cart Available from Seth Kaller
Share this item