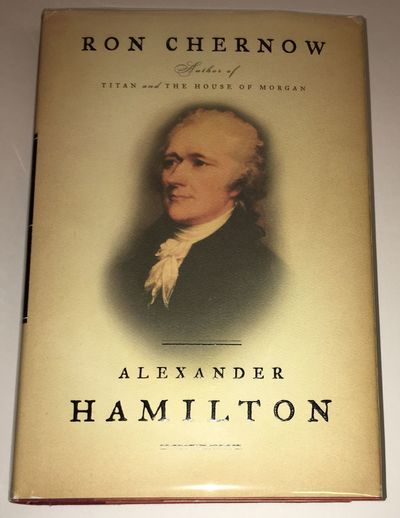 by Chernow, Ron
New York: The Penguin Press, 2004. First edition. hardcover. A fine copy in a fine dust jacket. A biography of American statesman Alexander Hamilton, one of the Founding Fathers of the United States, who was an instrumental promoter of the U.S Constitution, and the founder of the nation's financial system, and its first Secretary of the Treasury. The book won the inaugural George Washington Book Prize and was a nominee for the National Book Critics Circle Award in biography. In 2015, the book was adapted to the stage by playwright Lin-Manuel Miranda, who first read the book while on vacation and realized its potential for a 'different' kind of musical, drawing heavily from hip hop, as well as R&B, pop, soul, and traditional-style show tunes; the show also incorporated color-conscious casting of non-white actors as the Founding Fathers and other historical figures. Through his use of modern storytelling methods, Hamilton has been described as being about "America then, as told by America now." The show premiered at the Public Theater Off-Broadway on February 17, 2015, where its engagement was sold out; it won eight Drama Desk Awards, including Outstanding Musical. It then trasferred to the Richard Rodgers Theatre on Broadway, opening on August 6, 2015, where it received uniformly positive reviews and strikingly high box office sales. At the 2016 Tony Awards, Hamilton received a record setting 16 nominations, eventually winning 11 awards, including Best Musical. It received the 2016 Pulitzer Prize for Drama. 818pp with index. (Inventory #: 14369)
$200.00 add to cart or Buy Direct from Ed Smith Books
Share this item