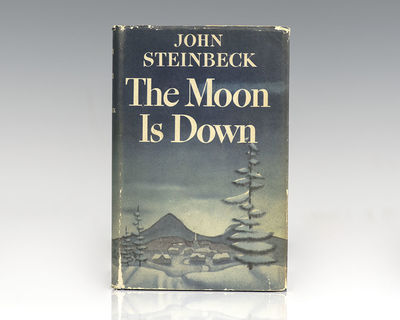 by Steinbeck, John
New York: The Viking Press, 1942. First edition, second issue of the Nobel Prize-winning author's classic work. Octavo, original blue cloth. Near fine in an excellent price-clipped dust jacket with light rubbing and wear. Jacket illustration by Frank Lieberman. A nice example. In 1941 Steinbeck met "with officials of the Foreign Information Service, a newly formed unit of what would soon become the Office of Strategic Services, to discuss the future of American counterpropaganda efforts. The Moon Is Down, begun later the same month, had its origins in Steinbeck's long-standing desire to contribute to these efforts... Steinbeck submitted a first finished draft of The Moon Is Down, originally written as a play (called 'The New Order') and set in a mid-sized town in the United States, to agency officials; they turned it down, concerned that the prospect of an occupied America might lower morale. Early in December Steinbeck began revising the work, shifting the setting to a generic northern Europe and recasting the play as a novel; he sent his revised draft to Pascal Covici, his editor at Viking, later in December. The Moon Is Down [as a novel] appeared in book form in March 1942. A stage version opened on Broadway on April 9, 1942, and was published by Dramatists Play Service in New York later in the same year" (Library of America). (Inventory #: 102188)
$100.00 add to cart or Buy Direct from
Raptis Rare Books
Share this item

Ida Broke: The Humor and Philosophy of Golf.

by Evans, Chick and Barrie Payne

by Johnson, Lyndon B. Photographs by Ansel Adams