Union League of Philadelphia Supports Re-Election of Lincoln as “the man for the time” No. 17: Abraham Lincoln 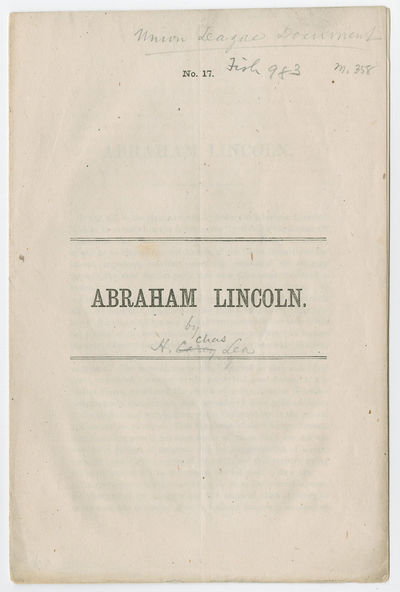 "What will be the place assigned by history to Abraham Lincoln?" (p3)

"Few of us can forget the feelings of doubt and distrust with which we regarded his advent to the Presidential chair.... That his native energy had elevated him from a youth of poverty and labor was reassuring, and yet the narrow sphere in which his life had mostly been passed seemed to deprive him of the opportunities of familiarity with the great principles and details of statesmanship requisite for the perilous contingencies of the future." (p3-4)

"Thus with doubt, confusion and demoralization around him, with no landmarks in the past to serve as a guide for the present or as a precedent for the future, did Mr. Lincoln undertake the awful responsibilities of his high position.... Thus relying on himself and on the people, he boldly set to work to restore the Republic." (p5)

"The country was saved so soon as the people recognized in their President a man who believed that he could save it, and who honestly intended to do so. Had Abraham Lincoln done no more than this, he would have merited a place between Washington and Jackson. It is a great thing to lift a nation to the highest level of its duties and responsibilities, and few men to whom, in the world's history, the opportunity has been vouchsafed, have accomplished the task so thoroughly." (p6)

"And now the momentous question arises before the American people—to whose hands shall be confided the delicate trust of restoring the Union of our fathers?" (p7)

"The great duty to which Mr. Lincoln has dedicated himself with rare singleness of purpose is the one thought which engrosses every true American heart—the re-establishment of the Union on a permanent basis." (p7)

"The results of the war during the last twelve-month have not shown that the Proclamation was a mistake in military policy." (p9)

"When Mr. Lincoln recommended the plan of compensated emancipation which was adopted by Congress, he showed that he recognized fully how great an element of future strife lay in the institution of slavery, and how beneficial to the whole country, its abolition would be.... Moderate in all his opinions, he wanted a gradual, not a violent change, and long after his Emancipation Proclamation was issued, he provoked the wrath of the radical emancipationists in Missouri, by lending what aid he constitutionally could, to the 'conservatives' in that State, who desired that the extinction of slavery should be brought about gradually. Possibly in this Mr. Lincoln was mistaken, yet if so, the error arose from the desire which he has constantly manifested, to harmonize the conflicting interests of the country, even at the expense of temporary popularity." (p9-10)

"The wisest statesman does not disdain to profit by experience, nor can the head of a popular government adopt measures of fundamental change before the people are ripe for them. It is probable that Mr. Lincoln learned much as the war wore on; at all events, the people did...." (p10)

"There are many who have richly earned the gratitude of the people for eminent services rendered to the Republic in the hour of her trials. There is no one who has so signally centered upon himself the confidence of all. There have been mistakes of detail in military, naval, and financial matters—mistakes inseparable from the sudden transition from profound and prolonged peace to civil war upon the largest scale. Yet in the general policy of the administration, in its principles of statesmanship, there have been few errors save those arising from a too generous disbelief in the sincerity of Southern madness." (p11)

"Had Mr. Lincoln moved faster than he has done, he would have left the people behind him, and lost the support without which no popular government can conduct an exhausting war." (p11)

"As a MAN OF THE PEOPLE, understanding them and trusted by them, he has proved himself the man for the time." (p12)

"no one can be named who unites, like Abraham Lincoln, the kindliness and firmness, the skill and experience, the native sagacity and honesty to bring about an harmonious settlement, and to extort from repentant rebels the implicit confidence which those high qualities have won from all loyal men." (p12)

The Union League Club of Philadelphia formed in 1862 as a patriotic society to support the Union and the policies of the Lincoln administration. The members of this private club represented the Philadelphia region's elite in business, education, and religion.

On April 15, 1864, Lea met with Lincoln in Washington, and three days later, he wrote to Lincoln, including two pamphlets he had recently written for the Union League Club, including this one. He informed Lincoln, "To prevent misconstruction, perhaps I should add that I am a man of independent position, with nothing to ask at your hands, except the preservation of our institutions."


Henry Charles Lea (1825-1909) was born in Philadelphia and received a classical education from a private tutor. He showed particular promise in natural history. He joined his father in the publishing business in 1843, but had a nervous breakdown in 1847. While recuperating, he read medieval French history and decided to become a historian rather than a scientist. Over the next fifty years, Lea produced ten books and numerous articles on medieval institutional, legal, and ecclesiastical history. During the Civil War, Lea was a member of the Union League of Philadelphia and led its Board of Publication. In that role, he wrote many of the League's published pamphlets, including this one. From 1863 to 1865, he served as a Bounty Commissioner and aided the provost marshal in recruiting soldiers, including African Americans. (Inventory #: 24898)
$950.00 add to cart Available from Seth Kaller
Share this item