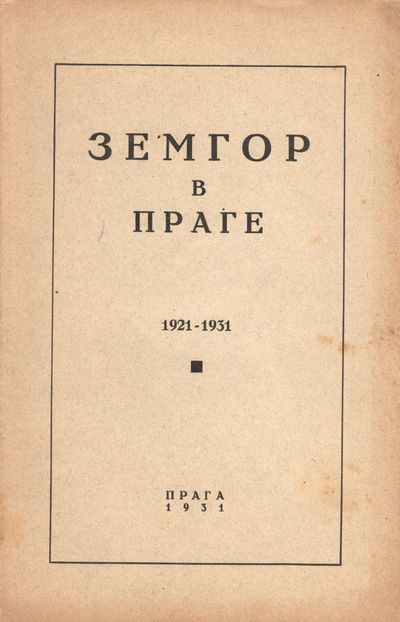 by Nikolaev, S. N.
Prague: Izdanie Prazhskogo Zemgora, 1931 (printed in France). Octavo (24 Ã— 15.5 cm). Original printed wrappers; 135, [2] pp. Light soil and foxing to wrappers, else very good. Jubilee publication marking ten years of the Prague "Zemgor" (Russian Zemstvos and Towns Relief Committee), a Czech branch of one of the largest Ã©migrÃ© aid and cultural organization founded in Paris, France in 1921 by members of the "White emigration" fleeing Russia after the Bolshevik revolution. The publication highlights the humanitarian activities of the Prague Zemgor, which helped refugees with their legal status, provided medical, financial, and educational aid. The organization also aided a number of pre-Revolutionary cultural institutions in Prague, such as the Russian University, the Russian archive, Russian technical school, as well as the Russian library. Russian publications such as the magazine "Russian school abroad" and "Paris Zemgor bulletin" were also part of its output. A descendent of the Russian local self-government, the original Zemgor was founded during WWI by the members of the Constitutional Democratic (Kadets) party to help the government with the war effort. The organization was disbanded in 1919, during the Russian Civil War by the Bolshevik government. It was revived in Paris by Prince George Lvov (1861-1925), and functions to this day, with the Prague branch active 1921-1935. Printed in Paris, this publication provides in-depth information about the life of the Russian Ã©migrÃ© community in Prague. As of January 2020, KVK and OCLC show print copies at Yale, Hoover Institution, Leeds, The British Library and Bayerische Staatsbibliothek. (Inventory #: P004250)
$275.00 add to cart or Buy Direct from
Bernett Penka Rare Books
Share this item