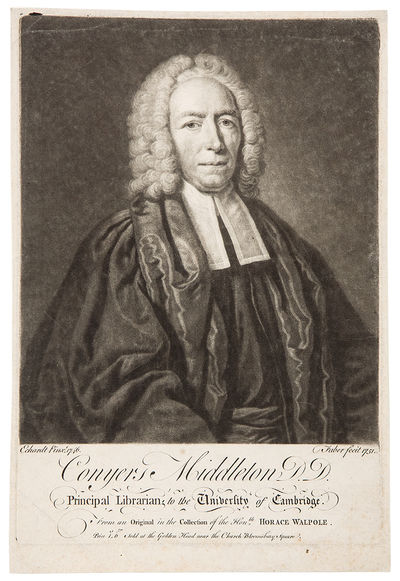 by FABER, John, Jr. (circa 1695-1756); after ECHARDT, J.G. (1740-1779)
London, 1751. Mezzotint portrait, by Faber after John Giles Echardt. Image size: 13 x 9 inches. Sheet size: 13 3/4 x 9 1/4 inches. This portrait of Conyers Middleton by Faber shows him in a dark clerical robe and short white wig, John Faber Jr., the son of John Faber, also an engraver, was born in Amsterdam but raised in England, where he learned drawing and mezzotint engraving from his father. He eventually enrolled at St. Martin's Lane Academy and went on to become a prolific and well-respected portrait engraver. He is best remembered for his forty-seven plates of members of the Kit-Cat Club after Kneller and a series of twelve portraits entitled "Beauties of Hampton Court". Conyers Middleton was a theologian, author, and fellow of Trinity College, Cambridge. He was appointed the University Libarian in 1722. He was known as a controversial figure with skeptical tendencies, which culminated in his being sued by Richard Bently, the master of the college, for doubting the historical accuracy of the Bible. He is also known for his most famous work, The Life of Cicero (1741), about the Roman statesman, Marcus Tullius Cicero and for his theological work, Introductory Discourse and the Free Inquiry (1747-8). Chaloner Smith 241. (Inventory #: 36373)
$450.00 add to cart or Buy Direct from
Donald A. Heald Rare Books
Share this item
Donald A. Heald Rare Books
Offered by