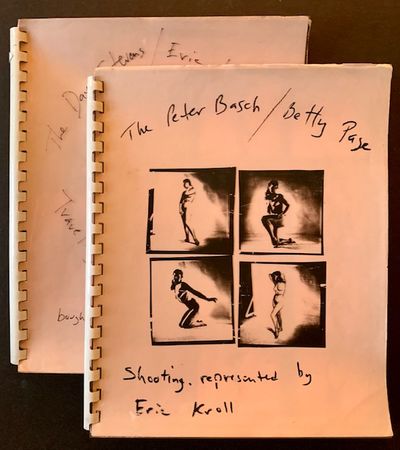 Original wraps
Original wraps. Very Good +. 2 one-of-a-kind collections of Bettie Page contact sheets. The first, called "The Dave Stevens/Eric Kroll Travelling Show Part I", was purchased by the renowned fetish photographer Eric Kroll in 1989. As he wrote in pencil on the rear pastedown, "These are the contact sheets I made from the negatives I bought in the 1980s. They are all shot by amateurs". Below this, Eric Kroll signed his name and wrote the word "Unique". What we know is that Bettie Page occasionally hired herself out to local camera clubs for posing and in this instance the club in Spring Valley (Rockland Co.), New York was given full access to shoot away. These contact sheets, even though "shot by amateurs", show a consistently high quality and a number of the images have become classic poses in the Bettie Page canon. The contact sheets have been collected into a charmingly make-shift, comb-bound book, with a pink front wrapper protected by a pictorial mylar cover. The contact sheets are clean and well-preserved, the book solidly VG+. The second book, called "The Peter Basch/Betty Page Shooting (Represented by Eric Kroll)", is also a one-off. On the last endsheet, Eric Kroll has written in pencil: "I discovered that Peter Basch had photographed Betty Page. When I contacted him in the late '80s he had no idea who he was. This is a 'book' I made of all the contacts of all the sheets he had made of Betty. One of a kind". Underneath this he signed his name and then wrote "NYC". Like the first book, this one is charmingly make-shft as well, and also has a comb-binding with pink wrappers protected by pictorial mylar covers. Likewise, it's also clean and bright and VG+. Both books, which are uniform octavos, show a bit of minor curling at the covers. Impressive, very scarce Bettie Page material, with a strong provenance (thanks to Eric Kroll), particularly important in this case given that contact sheets of hers infrequently appear on the market. Priced as a pair. (Inventory #: 17888)
$4,500.00 add to cart or Buy Direct from Appledore Books
Share this item
Appledore Books
Offered by

One Morning in Maine (3rd printing, in Dustjacket)

New York : The Viking Press , 1954
(click for more details about One Morning in Maine (3rd printing, in Dustjacket))

Basel, Switzerland : Roths' Verlag , 1988
(click for more details about Sketchbook 83)
View all from this seller>