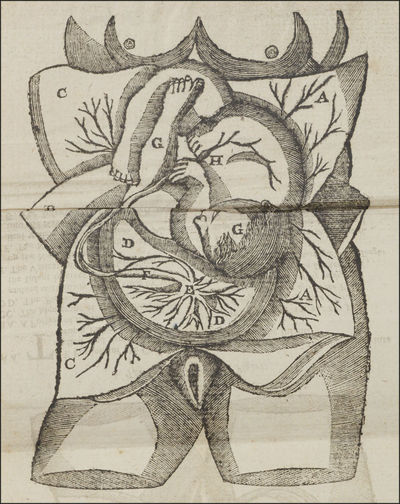 by [Sexuality]. [Medicine]. [Salmon, William].
London: Printed and Sold by the Booksellers, [ca. 1750]. Stated tenth edition.. Upper edge of the folding frontispiece reinforced with a later strip of paper; some general light wear and soiling; a very good copy.. 12mo, recent plain drab boards, [4], [iv], 156, [4]. Frontis, one folding plate. As the ESTC catalog entry has it, "Not in fact by Aristotle; the attribution is spurious." This title page one of at least three variants of the so-called tenth edition, with "Women" as the final line in the paragraph beginning "A Work far more perfect. . . ." One of the so-called Aristotle titles, generally attributed to the English physician William Salmon. With the striking woodcut folding plate diagram of a fully-developed fetus in the womb. Later physician's bookplate on the front paste-down. (Inventory #: 19240)
$750.00 add to cart or Buy Direct from
Garrett Scott, Bookseller
Share this item