Child of Change: The Autobiography of Garry Kasparov 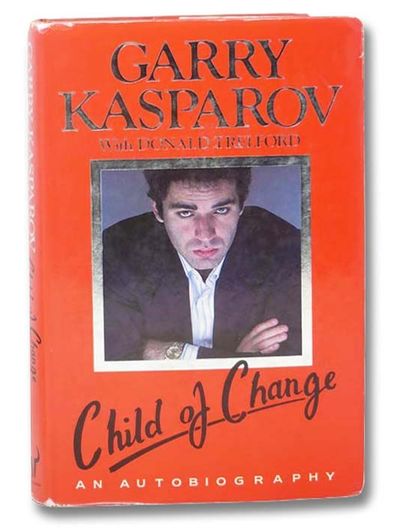 by Kasparov, Garry; Trelford, Donald
London: Hutchinson, 1987. First Edition. Hard Cover. Very Good/Very Good. First edition. Jacket edges rubbed. Board corners lightly bumped. 1987 Hard Cover. 243 pp. "Garry Kimovich Kasparov (Russian: ?????? ???????? ?????????, Russian pronunciation: [??ar?? ?k?im?v??t? k??spar?f]; born Garik Kimovich Weinstein,[2] 13 April 1963) is a Russian chess grandmaster, former world chess champion, writer, and political activist, whom many consider to be the greatest chess player of all time.[3] From 1986 until his retirement in 2005, Kasparov was ranked world No. 1 for 225 out of 228 months. His peak rating of 2851,[4] achieved in 1999, was the highest recorded until being surpassed by Magnus Carlsen in 2013. Kasparov also holds records for consecutive professional tournament victories (15) and Chess Oscars (11). Kasparov became the youngest ever undisputed World Chess Champion in 1985 at age 22 by defeating then-champion Anatoly Karpov.[5] He held the official FIDE world title until 1993, when a dispute with FIDE led him to set up a rival organization, the Professional Chess Association.[6] In 1996 he became the first world champion to lose a match to a computer under standard time controls, when he lost to the IBM supercomputer Deep Blue in a highly publicized match. He continued to hold the "Classical" World Chess Championship until his defeat by Vladimir Kramnik in 2000. In spite of losing the title, he continued winning tournaments and was the world's highest-rated player when he retired from professional chess in 2005. After Kasparov retired, he devoted his time to politics and writing. He formed the United Civil Front movement, and joined as a member of The Other Russia, a coalition opposing the administration and policies of Vladimir Putin. In 2008, he announced an intention to run as a candidate in that year's Russian presidential race, but failure to find a sufficiently large rental space to assemble the number of supporters that is legally required to endorse such a candidacy led him to withdraw. Kasparov blamed "official obstruction" for the lack of available space.[7] Although he is widely regarded in the West as a symbol of opposition to Putin,[8] he was barred from the presidential ballot,[7] as the political climate in Russia makes it difficult for opposition candidates to organize.[9][10] Kasparov is currently chairman for the Human Rights Foundation and chairs its International Council. In 2017, he founded the Renew Democracy Initiative (RDI), an American political organization promoting and defending liberal democracy in the U.S. and abroad. He also serves as chairman of the group.[11][12] (Inventory #: 2301514)
$15.00 add to cart or Buy Direct from
Yesterday's Muse
Share this item
Yesterday's Muse, Inc.
Offered by

She Stands Alone: The Story of Pilate's Wife

Boston : The Page Company , 1901
(click for more details about She Stands Alone: The Story of Pilate's Wife)

The Song of the Evening Stars

Boston : Richard G. Badger , 1911
(click for more details about The Song of the Evening Stars)
View all from this seller>