The Cinema of Orson Welles 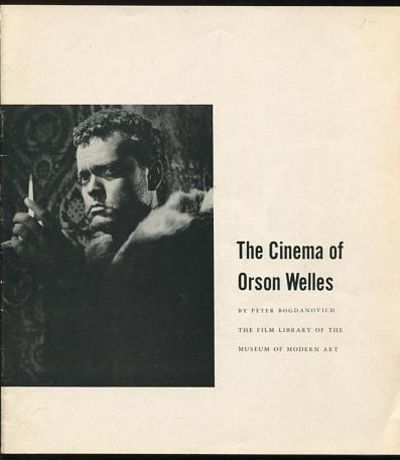 by Bogdanovich, Peter
New York: Museum of Modern Art. Near Fine. (c.1961). First Edition. Softcover. [light soiling and minor wear along spine, otherwise a very nice copy]. (B&W photographs) A16-page monograph, published in conjunction with MoMA's retrospective of Welles's films -- essentially just an annotated filmography, covering all the director's features from CITIZEN KANE through TOUCH OF EVIL (eight films, plus a short bit on JOURNEY INTO FEAR),with a brief summary of his major unrealized film projects. CITIZEN KANE - - then a mere 20 years old -- already must have seemed like ancient history to its creator, whose Hollywood career was by then in a shambles. (It's almost unbearably poignant to read, as Bogdanovich writes, that "now completing a modern film version of 'Don Quixote,' Welles at 46(!) is at the height of his creative powers. Asked of his future projects, he says, 'My only project is to find money to work. I need money to make movies -- film is the most expensive paintbox ever invented -- if I were a writer or a painter I'd only need a pen or a couple of tubes of paint. I have made only eight films in twenty years. I will go wherever there is work.'" (This little booklet, the first of three such monographs that he produced under the MoMA imprint, was one of Bogdanovich's earliest publications. He was then 22, and just getting started as a critic/ historian, and had his own early directorial triumphs and descending career arc, not unlike that of Welles, ahead of him.) . (Inventory #: 25077)
$75.00 add to cart Available from ReadInk
Share this item
ReadInk
Offered by