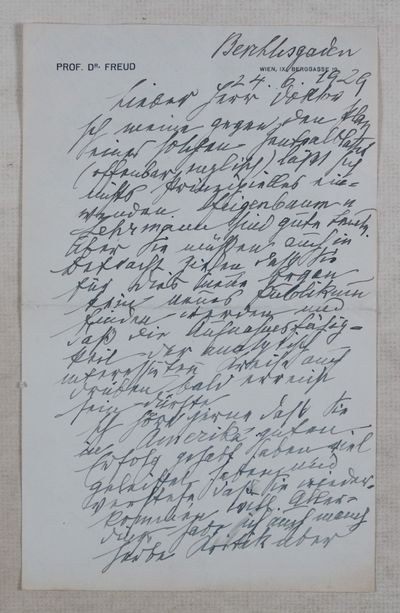 by Freud, Sigmund
Vienna: NP, 1929. Original document. Loose leaf. Fine condition. Octavo (9 x 5 5/8). Two page handwritten letter from Sigmund Freud to Fritz Wittels, dated June 24, 1929, on printed Freud letterhead.* Dr. Fritz Wittels, an Austrian-born American psychoanalyst, was a friend and a biographer of Sigmund Freud. He published the biography of Freud "Sigmund Freud; der Mann, die Lehre, die Schule" in 1924. It was translated by Cedar and Eden Paul as "Sigmund Freud, his personality, his teaching, & his school" and published in the same year by G. Allen & Unwin in London. In 1931, the Horace Liveright Inc. pubished Wittles' "Freud and his time: the influence of the master psychologist on the emotional problems in our lives." Wittels' memoires were published posthumously in 1995 as "Freud and the child woman: the memoirs of Fritz Wittels." Deeply upset by Wittels' depiction in the 1924 biography the discord between the two letd to Wittel' resignation from the Vienna Psychoanalytic Society in the same year. This was the second time Freud and Wittels had a fallout after their controversy over Wittels' intention to publish his book "Ezechiel der Zugereiste in 1910. Eventually Wittels made some corrections to his Freud biography , the two reconciled and Wittles was readmitted to the Society as a member in 1927. A year later in 1928, Wittels was invited to teach at the New York School for Social Research and permanently moved to America in 1932. In his memoirs Wittels features Freud playing a crucial role in the story about the erotic triangle between Kraus, Wittels and Irma Karczewska which is said to have impinged directly on the activities of the society. The references "Feigenbaum u. Lehrmann" in Freud's letter relate to Dorian Feigenbaum who founded "The Psychoanalytic Quarterly" in 1932. It describes itself as "the oldest freestanding psychoanalytical journal in America." Philip R. Lehrman, a medical doctor, had joined the New York Psychoanalytic Society in 1921 and was the secretary of the Society from 1935-1944. He and his family had travel to Vienna for one year of analytic work with Freud in 1928. During his stays he produced numerous films of Freud and his colleagues with his Bell and Howell camera. These films are considered of inestimable value for the history of psychoanalysis. In the letter Freud shows himself agreeable to the founding of a "Zentralblatt" in America but is skeptical about the necessary audience for such a publication (The publication becoming the "The Psychoanalytical Quarterly"). He writes that he is glad to hear about Wittels' success in America but lets him know that the fact that Wittles is posing as Freud's emissary on one hand and at the same time spreading indiscreet personal matters about Freud disturbs him. He ends the letter ominously: "I think you should know, what I heard about you." Lieber Herr Doktor! Ich meine gegen den Plan eines solchen Zentralblattes (offenbar englisch) lässt sich nichts prinzipielles ein- wenden. Feigenbaum u. Lehrmann sind gute Leute. Aber Sie müssen auch in Betracht ziehen, daß Sie für das neue Organ kein neues Publikum finden werden und daß die Aufnahmsfähig- keit der analytisch interessierten Kreise auch drüben bald erreicht sein dürfte. Ich höre gerne, daß Sie in Amerika guten Erfolg gehabt haben, viel geleistet haben und verstehe, daß Sie wieder- kommen.... Aller- dings habe ich auch manch herbe Kritik, aber page -2- gewiße (!) Züge Ihres Auftretens dort gehört vermuten, daß Sie sich einerseits als meinen Abgesandten hinstellen andrerseits recht indiskrete Dinge über mich erzählten (!). Ich meine Sie sollen wissen, was ich über Sie gehört habe. Mit besten Wünschen Freud Dear Doctor! I mean in priciple there are no objections against the plan of such a Zentralblatt (apparently English). Feigenbaum u. Lehrmann are good people. But you have to consider that you wont' find a new audience for the new publication and that the receptiveness of the analytically interested circles will reach its limits soon. I like to hear that you have had success in America, that you accomplished a lot and understand that you will return ... never- theless I also have some hrsh criticism, since page -2- certain (!) actions of yours I've heard of make me assume that, on one hand, you pose as my emissary, on the other you spread quite indiscreet things about me (!). I mean you should know what I have heard about you. With best wishes Freud. * From the collection of Drs. Kato van Leeuwen and S. L. Pomer. A portion of the proceeds will benefit the archives of the New Center for Psychoanalysis. (Inventory #: 46416)
$8,500.00 add to cart or Buy Direct from
Eric Chaim Kline Bookseller
Share this item