New England and New York in 1697; from the "Magnalia Americana 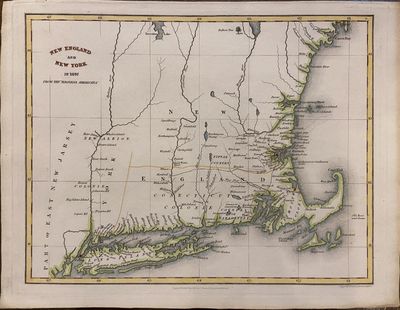 by HINTON, Isaac Taylor
London: Hinton, Simpkin & Marshall, 1830. unbound. Fenner Sears & Co.. Map. Hand colored engraving. Image measures 8 1/2" x 11 1/8". Historical map of colonial New England and New York showing the region in 1697. This engraving is based on a map originally published in 1702 in the Magnalia Christi Americana by Cotton Mather, an ecclesiastical history of New England outlining the religious development of the northeast in 17th century. This version was published in 1830. Region displayed includes part of 'East New Jarsey', Long Island, the New Albion Colonie, the Conecticut Colonie, Plymouth Colony, and Native American tribal lands labeled as Country of Naraganset, and Nipnak Country. Features rivers, waterways, town names, and the cities of New York, Boston, Plymouth, and Portsmouth. A notable detail is the 'Indicot Tree', illustrated toward the top edge of the map and referring to the oldest living cultivated fruit tree in North America, now known as the 'Endicott Pear Tree'. Map is in very good condition. (Inventory #: 295412)
$300.00 add to cart or Buy Direct from
Argosy Book Store
Share this item