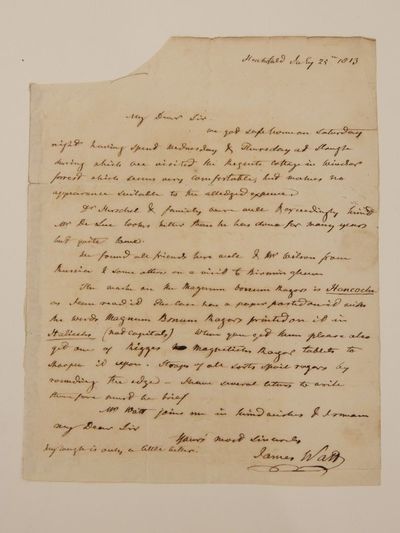 by WATT, James (1736-1819)
Heathfield, 1813. unbound. very good. Rare A.L.S. with an unusually large and fine full signature: "James Watt", and a second signature when he refers to his wife as "Mrs. Watt", 4to, 1 page, Heathfield, July 25th 1813, advising the recipient that he has returned from a short trip, in full: "We got safe home on Saturday night having spent Wednesday & Thursday at Slhough during which we visited the Regents cottage in Windsor Forest. Dr. [William] Herschel & family are well & exceedingly kind. Mr. Dulac looks better than he has done for many years - but quite lame. The mark on the Magnum Bornum Razor is Hancock as I can read it. The case has a paper parted on it with the words Magnum Bornum Razor tablets to sharpen it upon. Strops of all sorts spoil razors by rounding the edge. I have several letters to write therefore must be brief. Mrs. Watt joins me in kind wishes *& I remain Your's most sincerely." P.S."my cough is only a little better." Condition: Paper loss at the top left-hand margin, similar to an example sold by Americana Auctions in 2015 which was described as "irregularly cut". It should be noted that this letter is very unusual in that it is very neatly written and easily read - unlike the majority of Watt's surviving letters which are written in a nearly indecipherable hand, reminiscent of Horace Greeley. As recently as 2013, R & R Auctions sold a letter of Watt's dated February 1813, five months before our letter, that was described as "written in his challenging handwriting". Footnote: Dr. William Herschel was Watt's lifelong friend and one of the world's most famous astronomers; discovering Uranus, two moons of Saturn, and infrared radiation. In 1793, Herschel testified in Watt's behalf during a lawsuit in which he was battling rival steam engine manufacturers. Scottish inventor and mechanical engineer who improved on Thomas Newcomen's steam engine, which was fundamental to the changes brought by the Industrial Revolution. (Inventory #: 295435)
$3200.00 add to cart or Buy Direct from
Argosy Book Store
Share this item