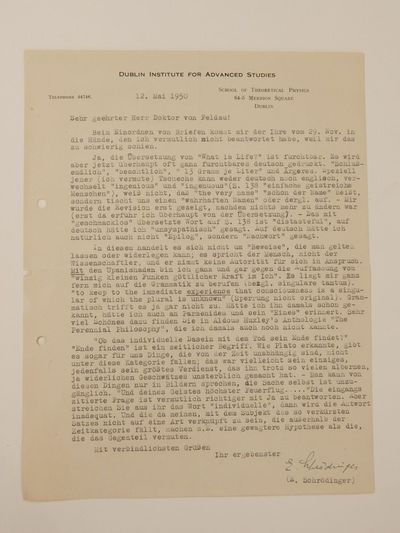 by SCHRODINGER, Erwin (1887-1961)
Dublin, 1950. unbound. very good. Fine content and rare T.L.S. 4to, 1 page, Dublin School for Advanced Studies, School for Theoretical Physics, May 12th 1950, to Dr. James Feldau, concerning a translation of the book "What is Life", in part: "...Yes, the translation is horrible. Anyway, nowadays much terrible German is printed. Especially that I presume the Czech fellow knows neither German nor English, confuses 'ingenious' with 'ingenuous'. I was only shown the revision when it was too late to change anything. Only at that point did I even find out abut the translation. The word translated as 'geschmacklos [tasteless]' on p. 138 is "distasteful,' in German I would have said 'unsympatisch [unappealing]'. Of course, in German I would have also not have used 'Epilog' but 'Nachwort' [epilogue] instead. All these are not "proofs", which one can either accept or refute; they are an expression of the human mind, not that of a scientist, and he claims no authority. Along with the Upanishads, I am completely against the understanding of the 'tiny spark of godly power ion the self.' Nothing could be further from me than to call on grammar (regarding singular tantum) "to keep to the immediate experience that conscience is a singular of which the plural is unknown" (type expansion is not in the original). This certainly is not grammatically correct. Had I known him back then, I would have reminded him of Parmenides and his "one". Many beautiful things on this subject can be cound in Aldus Huxlet's anthology 'The Perennial Philosophy', which I also didn't know back then. As Plato discovered, things exist which, even for us, are independent from time, don't fall into this category. That was probably his only, or at any rate his greatest, achievement, that has made him immortal despite so much silly, even unbearable drivel. One can speak of things only in metaphors, the tings themselves are unattainable. And the loftiest fiery flight of your spirit ... the question posed at the beginning is probably best answered with 'yes'. But erase from it the word 'individual', and the answer becomes inadequate. And those who believe not to be tied to the thus shortened sentence in a manner which lies outside the category of time make, in my opinion, a more precarious hypothesis than those who presume the opposite." Boldly signed and in excellent condition. Austrian physicist who was the recipient of the Nobel Prize in Physics (1933) for his development of a number of fundamental results in the field of Quantum Theory. (Inventory #: 295456)
$4000.00 add to cart or Buy Direct from
Argosy Book Store
Share this item