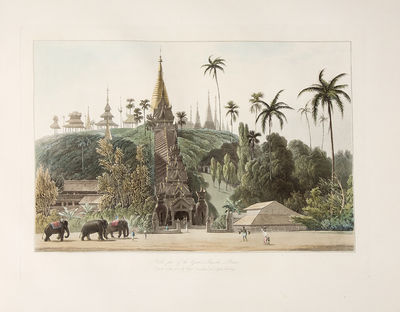 by KERSHAW, Captain James, after; and William DANIELL (1769-1837), engraver
London: Smith, Elder and Co, 1831. Oblong folio. (18 1/2 x 23 1/2 inches). 10 hand-colored aquatints by Daniell after Kershaw. Wrapper title in expert facsimile. Expertly bound to style in red straight grain morocco, covers bordered in gilt, spine gilt A very rare complete set of views engraved by Daniell after Kershaw, depicting the aftermath of the First Anglo-Burmese War (1824-26). Kershaw was a member of the invading forces who made drawings of the journey between Rangoon and the capital. Announced for sale in the Asiatic Journal, they are there described as "extremely beautiful, and do very great credit to the pencil of Capt. Kershaw, and the the graver of the eminent artist conjoined with him. The gorgeous temples and peculiar edifices at Rangoon, Prome, Pagahm Mew &c. are represently with great fidelity; and the landscapes are exquisite. We have rarely seen a more successful exhibition of Eastern scenery, with all its soft tints, delicate light and luxuriant foliage ... These plates afford the best idea of Burman scenery we have yet met with and we shall be surprised if they do not attact much notice." The plates comprise: 1. Rangoon from the Anchorage. 2. View from Brigadier McCregh's Pagoda, Rangoon. 3. Dagon Pagoda, near Rangoon, taken from the Lines of H.M. 13th & 38th Regiments. 4. Dagon Pagoda, near Rangoon. 5. Prome, from the South heights. 6. North face of the Great Pagoda, Prome. 7. View from the West face of the Great Pagoda, Prome. 8. Prome, from the heights occupied by H.M. 13th Light Infantry. 9. Melloon from the British Position. 10. Pagahm-Mew. We trace just one complete copy in the auction records of the last 50 years (the Travis-Bobins-Lohia copy). Abbey does not call for a title-page, but notes that a title appeared on the printed publisher's wrappers, here reproduced in expert facsimile. A text volume, titled Description of a Series of Views in the Burman Empire, also appeared separately and is not present here. Abbey Travel 406; Bobins 797; cf. Cooler, British Romantic Views of the First Anglo-Burmese War (Dekalb, 1977). (Inventory #: 36757)
$28000.00 add to cart or Buy Direct from
Donald A. Heald Rare Books
Share this item
Donald A. Heald Rare Books
Offered by