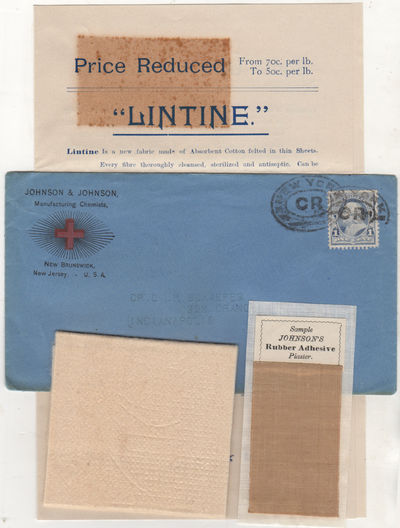 New Brunswick, New Jersey, 1891. Envelope or Cover. Very good. This grouping consists of a four-page brochure, a sample of Lintine, a sample of Johnson's Rubber Adhesive Plaster, and their original mailing envelope that features a "red cross" logo corner card. The envelope is franked with 1-cent blue Franklin stamp (Scott #219, which was issued in 1890) canceled with two double-oval New York postmarks. Everything is in nice shape. The brochure has two rectangular ghost stains made by the rubber adhesive plaster sample. The brochure touts: "Lintine . . .a new fabric made of Absorbent Cotton felted in thin Sheets. Every fibre thoroughly cleansed, sterilized and antiseptic [as an important advance over] Lint and Cotton. Greater absorbency. Tears readily. No loose fibres to stick to the wound or clothing. - Covers 50 per cent more surface than same weight of Lint or Cotton. . .." It also recommends a variety of uses for Lintine including as "an Improved Bandage . . . Substitute for Sponge . . . a Covering for patients' limbs during operation . . . Napkins for the sick in cases of tuberculosis, diphtheria, etc. [and] as a Pencil or Mop for throat, rectal or vaginal applications. . .." Other promoted products include "Johnson's Rubber Adhesive Plaster," "Johnson's Belladonna Plaster . . . which frees the pores from clogging matter, thus promoting absorption" of drugs, and "Canthos a Blister Plaster, made of Spanish flies. . ..". While today we take pristine, sterilized cotton swabs, balls, and dressings for granted, that has not long been the case. Throughout most of the 1800s, cotton was not useful as a dressing as it was only available in its raw state. It was not very absorbent, and it was filled with debris, dead insects, and filled with insect and rodent fecal matter. However, before the 1880s, surgeons used it anyway due to lack of alternatives. It wasn't until 1886, when Johnson & Johnson developed a system able to clean, card, roll, and box cotton between layers of tissue paper, that it could be easily used for medical treatment. Continuing its attempt to improve the product, in 1896, the company revolutionized bandaging when it introduced the first truly sterile dressing, Lintine, in which sterilized cotton fibers were pressed into felted clothlike sheets. For more information see Johnson & Johnson Red Cross Notes II-8, 1899 and Gurowitz's A Study in Cotton online at Kilmer House. This advertising packet is a testament to the new product. Perhaps now unique. At time of listing, a review of auction records (including philatelic auctions) shows nothing similar, and OCLC shows nothing similar held by any institution. (Inventory #: 009501)
$200.00 add to cart or Buy Direct from
Read'Em Again Books and Paper
Share this item