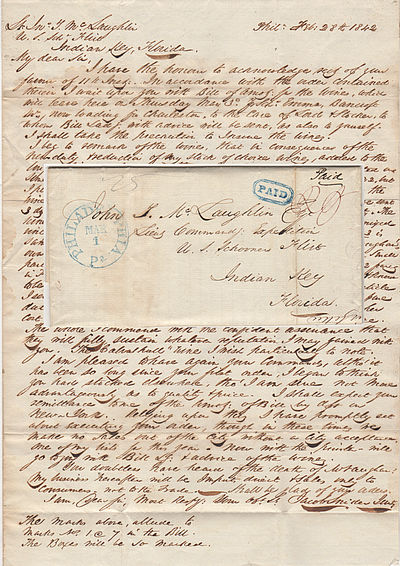 by John T. McLoughlin
An important archive relating to the short, tragic life of a Seminole Wars naval hero, who though brave, tactically and strategically astute, and technologically innovative, was also self-centered, ethically-challenged, and ostentatiously greedy.

This archive consists of 36 letters (34 to McLoughlin, one by McLoughlin, and one to McLoughlin's widow) and two documents. All have original postal markings. Some have splits beginning along mailing folds; one is in two parts. An annotated contents list will be included.

In 1839, Lt. J. T. McLaughlin took charge of a new three-ship Florida Expedition to protect settlers during the Seminole Wars. Recognizing this as an atypical naval mission, he developed the navy's first riverine tactics using canoes to take the fight into the heart of the Everglades, forcing the Seminole into small, hidden defensive groups and preventing their launching of coordinated attacks. Further, realizing the Everglades were less impenetrable than imagined, he conducted the first transit across southern Florida by white men.

However, McLaughlin was also a self-promoter. Although only a lieutenant, he fashioned himself an acting-Captain and flew an unauthorized commander's pennant. Worse, McLaughlin lived ostentatiously, drinking fine wines from crystal and filling his stateroom with luxury furnishings. In time, newspaper articles appeared alleging his misuse of funds, collusion with local merchants, embezzlement of food, mistreatment of marines, etc. When the allegations reached Congress, the House issued a scathing rebuke claiming McLoughlin had engaged in criminal behavior. McLaughlin subsequently assembled allies to refute the charges, which forced Congress to request a full investigation by the Navy. The Navy found that although McLoughlin's expenditures were excessive and extravagant, he was not guilty of any serious criminality. He was exonerated of all but two minor charges.

About half of the items in this archive relate to these allegations including invoices for fine wines and furnishings, expressions of support from subordinates, a tit-for-tat offer of testimony in exchange for a service-related favor, and the identification of two men who had likely been the secret instigators of the adverse press allegations.

Most of the other letters relate to McLaughlin's innovative, but unethical, construction of a state-of-the-art ship. McLaughlin, another naval officer, and McLaughlin's civilian brother, Matt, used naval influence and the officers' duty time to plan and build the vessel. Ultimately, they were successful, and Matt McLaughlin became the owner of the ship, the cutter Hunter, which he leased to the Navy during the Mexican War where it was commanded by--you may have guessed this--Lieutenant J. T. McLaughlin. Unfortunately, the ship was destroyed during a nor'easter while towing a captured blockade runner, after which McLaughlin soon died, probably from related injuries and illness.
These letters contain discussions about the feasibility of an "iron" ship, untested high-speed boilers, John Ericsson's cutting-edge double-screw propellers (to include the disaster on the USS Princeton for which McLaughlin was present), and McLaughlin's attempt to secure payment for the loss of the Hunter and its prize.

Lt. McLaughlin died at age 36 in 1847 following the Hunter's destruction, probably from a disease that he incurred during his Florida service. His wife received a Navy pension.
The final item is a bank letter to McLaughlin's widow repossessing her home because McLaughlin had defaulted on a large loan that he had probably used to fund construction of the Hunter.

A unique and important collection that sheds considerable light on a naval hero of the Seminole Wars and his controversies. At the time of listing, nothing similar is for sale in the trade, listed in auction records, nor held by institutions. (Inventory #: 009515)
$4,500.00 add to cart or Buy Direct from
Read'Em Again Books and Paper
Share this item