Andrew Jacksons famous veto of the Second National Bank Bill. Veto. Message from the President of the United States returning the Bank Bill to the Senate, with his Objections 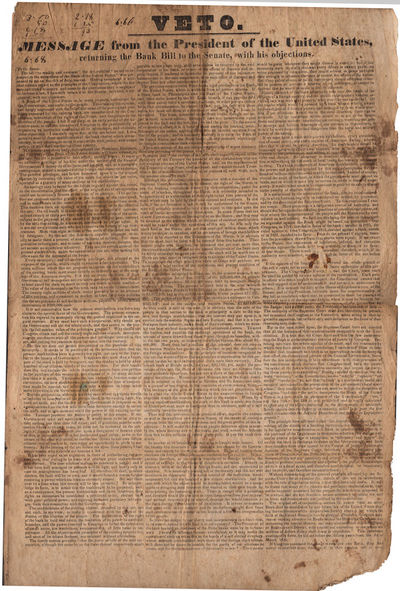 by President Andrew Jackson
Unidentified printer, 1832. Unbound. Very good. This broadsheet measures approximately 11" x 17.25. Printed on both sides. Light foxing and stains. Edges worn. Chip at lower right corner does not affect any text. One small thin (half the size of a dime) that affects three or four words of the text. Docketing in the upper left margin of the front page. Fragile along storage folds. The Second National Bank of the United States was the second federally authorized national bank. A private bank charged with doing public business, it was intended to keep the U.S. economy stable, smooth out variations in prices and trade, provide credit and a sound uniform national currency, provide fiscal services for the Treasury, and prevent inflation by regulating lending practices of state banks. The two major political parties of the time differed wildly in their opinion of the bank. The "National Republicans" led by Henry Clay and Daniel Webster were strong supporters; "Jacksonian Democrats" were fiercely opposed, claiming it favored financial elites, wealthy merchants, and speculators at the expense of farmers and craftsmen. Although it had received a 20-year charter from Congress in 1816, the National Republicans decided to re-charter the bank in 1832 to make the bank's continuance a Presidential election issue. President Andrew Jackson met the challenge head-on, and after Congress voted to re-charter the bank, he vetoed the bill and returned it to the Senate. Jackson and his Democrats turned the veto into a major populist rallying point and easily won re-election. While the economy initially continued to thrive, the bank's closure eventually led to the devasting Panic of 1837 and a recession lasting well into the next decade. Broadsheets announcing Andrew Jackson's famous veto of the 1832 bank bill are scarce. At the time of listing, none are for sale in the trade. There is only one auction record listed at Rare Book Hub. While digital images are available through Gale, OCLC lists no physical copies held by any institution, however, the American Antiquarian Society has two (by two different printers) and the Library of Congress holds one by a third printer. This broadside is different from those three and not listed in Sabin, Howes, Eberstadt, Streeter, nor the Checklist of American Imprints. (Inventory #: 009482)
$3,500.00 add to cart or Buy Direct from
Read'Em Again Books and Paper
Share this item