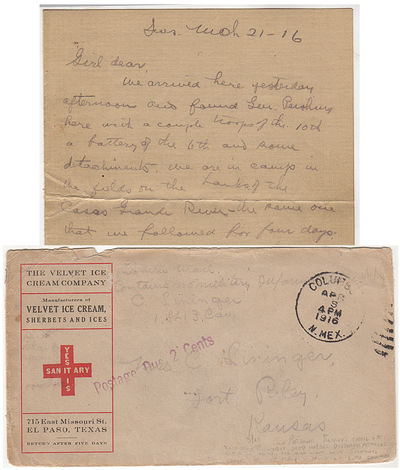 by Lieut. C. [Clarence] Lininger
Correspondence archive consisting of five airmail letters sent by an officer in the U.S. 13th Cavalry Regiment to his wife while on campaign with General Pershing in Mexico. Various locations in Mexico, 1916.

Contains exceptional content from the first days of the campaign following Pancho Villa's attack on Columbus, New Mexico, including:

March 21st - "We arrived here yesterday afternoon and found Gen. Pershing here with a couple troops of the 10th, a battery of the 6th and some detachments. We are in camp in the fields on the banks of the Casas Grande River - the same one that was followed for four days. . .. 2nd Sqdn & Troop L all under Maj. Lindsley were on the move to make 90 miles in two fast marches. So you see, things are on the move fast and I think they'll keep so.

"We & the general public don't know much about . . . about Villa, tho natives hereabouts say he is about a 100 miles south trying to recruit, but without much success. He has been too cruel to these people for them to look upon him with much favor. We followed his trail all the way from Columbus finding dead horses, discarded articles, campfires, etc. but he was 4 or 6 days ahead. . ..

"Contacts along the road say Villa took up to Columbus some 500 men and that he brought back some 300. He certainly got a drubbing at Columbus and the more I hear about the fight, the greater becomes my respect for the American soldier. The attack came in peace time, was absolutely unexpected, and the officers were so scattered about town that some of them never did get to their troops until the fight was practically over.

"Villa came to drive out the garrison and loot the town and maybe even go farther into our country. I haven't heard that a single soldier ran. On the other hand, they stuck together . . . fighting to good purpose. About 100 of Villas dead were counted and I suppose others deserted him. . ..

"Yesterday about 8 a.m. five of our aeroplanes flew over us and landed here. One of these was partially wrecked last night and the aviator injured; Bowen I think, in landing. They say they find the conditions here pretty good in the calm mornings and evenings except that at this altitude, they find the air light and they have to use more power.

"The 13th lost 45 horses killed and captured at Columbus. The 8th cav. sent that number over to fill us up and while a good many of them are pretty poor in one way or another I selected one that has turned out to be pretty good, in fact very satisfactory. . ..

"We have been using the water of the Casas Grande and Palomas River except at one place where our doctor made a Mexican girl drink some water from a well before we used it, but today a well is being dug in camp.

"The regiment is well equipped and is in fine shape. It is a fine regiment. On the way down, we had plenty of simple rations but the horses went short. They got only 8 or 10 lbs of oats where they usually get 12. They didn't get any hay but we stopped once or twice each day to graze in camp so that with very few exceptions, they look about as well as when they started. . .."

Later in the campaign, Lininger expresses his hope that the United States would not become embroiled in the Mexican Revolution.

"The bulletin template talks of cooperation between Pershing and the Carranzistas. , ,, It can't be done on Mexican soil. . .. The Mexican may hate a bandit but a Yanqui is even worse in his eyes. . .. Intervention [on behalf of any revolutionary] is folly. It would be one of the costliest blunders of all history. If we are to take drastic action in regard to Mexico we should seize and incorporate into our own territorial domains the northern tier of Mexican states. This would be an easy military task and would so startle and frighten the remainder of Mexico that it would be calm for another generation. I don't think Pres. Wilson contemplates any such thing but far better that than an attempted cooperation predestined to failure."

While the content of these letters is incredible, the way they were sent from within Mexico to the United States is even more remarkable.

Although two previous U.S. experimental airmail flights occurred in 1911, it wasn't until 1916 during the Pancho Villa Punitive Expedition that the first real U. S. airmail service was begun by the Army's 1st Aero Squadron and its eight JN-3 Curtis-Jenny aircraft. The unit, based at San Antonio, Texas, arrived in Columbus on 15 March and deployed to Pershing's base camp at Casas Grande, Mexico on the 19th. High winds, poor maps, lack of repair parts, and severe terrain hampered their deployment, and it took the squadron a full week to re-assemble in Mexico, where it was soon found that the airplanes lacked the power to fly high enough to reconnoiter the mountains where Villa's force was hiding. Further, sand and dryness damaged engines and propellers, and it became apparent that the planes would soon become inoperable. So, the commander, Captain Benjamin D. Foulois, limited their use to transporting communiques and mail until all were no longer flyable. (See Gilnes, "In Pursuit of Pancho Villa" in Air Force Magazine, July 1991 and Wilkins, "Genesis of the Jenny" at HistoryNet.com)

The American Air Mail Catalog (AMMC 92) provides information on how to identify letters mailed during this period, "On March 19 the 1st Aero Squadron began flying its eight planes between Columbus and points in Mexico, [transporting] mail and military command dispatches. . .. It is possible . . . to ascertain . . . if a particular letter was flown . . . from the field to Columbus. [If it is, it will bear] a Columbus postmark between March 19 and April 20."

The earliest letter in this group is dated March 21 and postmarked April 5; it contains a detailed description of the earliest days of the campaign including the arrival of Foulois's airplanes. Its postmark April 5, matches the date of one of only three previously known covers flown from Army camps in Mexico to Columbus. It is an eight-page letter datelined "Tues March 21-16" and its first paragraph indicates it was written "in camp in the field on the banks of the Casa Grande River." It is enclosed in its original envelope, an ice-cream advertising cover from El Paso and postmarked with a "Columbus, N. Mex." duplex handstamp dated "Apr / 5 / 4pm /1916". It is annotated "Soldiers mail. Contains no military information. C. Lininger 1. Lt 13.Cav." and hand-stamped "Postage Due 2 Cents." Docketing that reads "3/21 Gen Pershing followed trail from Columbus."


The Report of the Operations of the First Aero Squadron, Signal Corps, with the Mexican Punitive Expedition for the Period March 15 to August 15, 1916 notes that "with only two airplanes left, and these in unserviceable condition, the Squadron received orders on April 20th to return to Columbus, N.M., to secure new airplanes. . .. During the months of May, June and July, constant troubles and difficulties were encountered with defective propellers, motor parts and defects in construction." Once the planes were flying again, "The Squadron carried on extensive experiments with an automatic camera . . . in aero-reconnaissance." AMMC 92 also reports that eventually "new planes arrived at a later date and made flights into the field but it is unclear when mail was flown after April 20."

The other letters in the group are from this later time frame and shed light on when airmail service resumed. One, also, makes it clear that only officers could send mail by airplane.

A letter dated 14 Sep from Vado de Fusiles was postmarked in Columbus the following day. Truck transport would have taken at least three days. Only an airmailed letter would have been able to reach Columbus and be postmarked within a day.

A letter dated 23 Sep from Dublan contains the following text: "Will try to get this off by an aviator in the morning."

A letter dated 27 Sep from Dublan was postmarked in Columbus two days later. Truck transport would have taken at least three days. Also, it contains the text: "Will take this now to the aviation camp to mail it. . .."

A letter dated 24 Sep from Dublan. Although this letter was not postmarked until five days after it was dated, Lininger's next letter dated 26 Sep states, "I sent you a letter this am by aeroplane. . .. About every other day aeroplanes carry to or from Columbus officers first class mail."

Transcripts will be provided for the letters.

Lininger continued his Army service and retired in 1949 as a Brigadier General. He received the Distinguished Service Medal for heroism during this punitive expedition; his certificate reads "Lieutenant Lininger, while in action at Parral, Mexico, on 12 April 1916, proceeded under fire to the rescue of a dismounted man of his command who was in danger of falling into the hands of the enemy, and, taking him up behind him (Lieutenant Lininger) on his horse, carried him to safety."

Exceptionally scarce. At the time of this listing, no letters with first-hand accounts written during the expedition and sent from within Mexico by airmail are identified in any institutional collection, however, there may perhaps be one or more in the General George Patton papers at the Library of Congress. In 1992, the AAMC reported the value of a single postally used airmail envelope without a letter at $2,500 ($4,500 in 2019 dollars). There are no records of any auctions or sales for the even scarcer airmail covers from the later period. (Inventory #: 009486)
$9,500.00 add to cart or Buy Direct from
Read'Em Again Books and Paper
Share this item