Knowledge of Past and Future in Quantum Mechanics 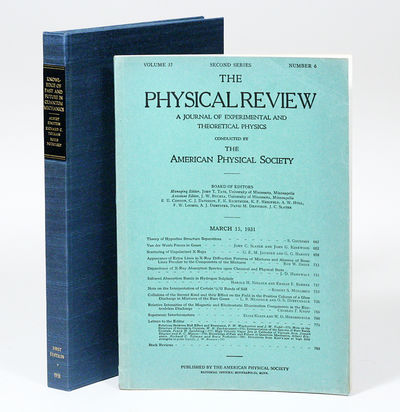 by EINSTEIN, ALBERT; TOLMAN, RICHARD C.; PODOLSKY, BORIS
Lancaster: Physical Review, 1931. First Edition. Original wrappers. Fine. FIRST EDITION, FIRST PRINTING, IN ORIGINAL WRAPPERS of Einstein's paper outlining a thought experiment to suggest that the uncertainty principle requires the acknowledgement of an indeterminate past. "To Heisenberg at the 1920's only the prediction of the future was important, and the mathematical theory assisted him to calculate the probability of the end-state given the initial state: the description of the intermediate development of the system between two objectively recorded or recordable states did not seem to correspond to physical reality.

"On the other hand, Einstein, as a critic of quantum physics, did not admit Heisenberg's standpoint, especially that the indeterminacy principle does not refer to the past. In the paper 'Knowledge of Past and Future in Quantum Mechanics' (1931), Einstein proposed an imaginary experiment, in which 'the possibility of describing the past path of one particle would lead to predictions as to the future behavior of a second particle of a kind not allowed in the quantum mechanics.' So Einstein concluded that 'the principle of the quantum mechanics must involve an indeterminacy in the description of past events which is analogous to the indeterminacy in the prediction of future events.'

"The problem of the 'indeterminate' past re-appeared about fifty years later in J. A. Wheeler's discussion of the 'delayed-choice' experiment. This experiment is not an imaginary but an actual one which uses one particle (say, photon) instead of two particles in Einstein's case...

"After confirming the fact that what we can say of past events is decided by (delayed) choices made in the near past and now, Wheeler discusses the possibility that the phenomena called into being by the present decision can reach backward in time, even to the earliest days of the universe. He says:

'To use other language, we are dealing with an elementary act of creation. It reaches into the present from billions of years in the past. It is wrong to think of the past as "already existing" in all detail. The "past" is theory. The past has no existence except as it is recorded in the present. By deciding what questions our quantum registering equipment shall put in the present we have an undeniable choice in what we have the right to say about the past.'

"The interpretation of the indeterminacy principle will be altered if we accept the concept of the past indeterminacy. Heisenberg originally considered this principle as the limit of the exactitude of two incommensurable quantities at the simultaneous measurement. But the indeterminacy of past events which have not been recorded, have a connection, not with their simultaneous measurability, but rather with the definability of their historic routes. That the definition of the past route or history of a particle depends on the present choice of an experimenter is the meaning of the 'indeterminate past'" (Yutaka Tanaka, "The 'Individuality of a Quantum Event"). Weil 178*.