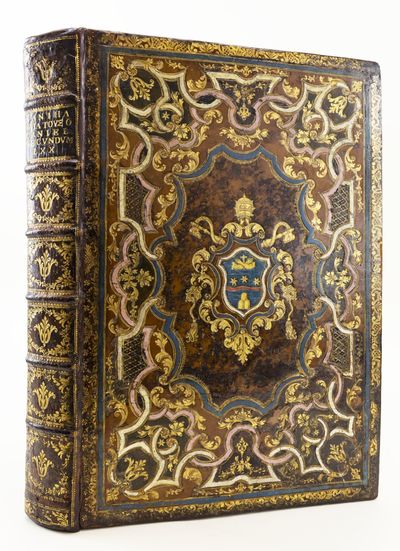 by (BINDINGS - PAPAL). BIBLE IN GREEK
Rome: Typis Propagandae Fidei, 1772. FIRST EDITION. 435 x 295 mm. (17 x 11 1/2"). XLIV, 668 pp.Edited by Simeon De Magistris. FIRST EDITION. VERY IMPRESSIVE CONTEMPORARY ROMAN MARBLED CALF, gilt and painted with colored wax, covers with gilt-roll border enclosing an elaborate frame of pink, blue, and white painted strapwork interwoven with gilt acanthus leaves, plumes, stars, and fleurons, the painted and gilt PAPAL ARMS OF CLEMENT XIV at center, raised bands, spine richly gilt with lily centerpiece framed by acanthus leaves and botanical tools, gilt titling, gilt-rolled turn-ins, marbled endpapers, all edges gilt and gauffered with rows of dots (expert repairs to joints and corners). Title page with engraved device showing the Madonna and Child, intricate engraved historiated initials, two engraved vignettes of incidents from the Book of Daniel (used as a headpiece and a tailpiece), and a folding double-page plate. Biblical text in parallel columns of Greek and Latin. A Large Paper Copy. Darlow & Moule 4759. For the binding: Fletcher, "Foreign Bookbindings in the British Museum," Plate LIX. Gilt a bit rubbed in spots near edges, leather a little darkened from acid treatment (as usual), title page with approximately three-inch square repair to fore edge margin (not affecting text), three leaves with similar size patch excised from fore-edge margin or lower corner (never touching text), other trivial imperfections, otherwise a very fine copy, the text clean, fresh, and remarkably bright with enormous margins, and the striking binding with its decoration still most attractive. This is an important Greek edition of the Book of Daniel, bound for the pope to whom it is dedicated. Based on a 10th century biblical manuscript held by the Chigi Library, it contains the text from the recension of the Septuagint prepared by Origen ca. 240 A.D. Origen's version of Daniel was superseded in the late fourth century by Theodotion's more literal translation of the Hebrew text, and was lost to scholars until the present work was published in 1772. Editor Simeon De Magistris has here supplied various scholarly additions: a chronology of Daniel according to the Septuagint, a commentary on Daniel by St. Hippolytus, a comparison between the Septuagint version and that of Theodotion, an explanation of the history of various versions of the Septuagint, a description of the library of Alexandria, and fragments of text from other Old Testament books. The present ornate binding, with painted elements reminiscent of Lyon entrelac work, is similar to one on a 1758 book of Offices done for our pope's predecessor Clement XIII, now held by the British Library (shelfmark c27e18). According to their Database of Bookbindings, Roman bindings in this style began to appear from 1750 on, and "the Salvioni firm was responsible for promoting the bindings, but it is not known which workshop produced them." Clement XIV was the name chosen by Giovanni Vincenzo Antonio Ganganelli (1705-74) when he ascended to the papacy in 1769. As pope, he was known for his suppression of the Jesuits, an action forced by the political situation in Europe and one that he regretted. Still, Britannica (1876) declared, "no pope has better merited the title of a virtuous man, or has given a more perfect example of integrity, unselfishness, and aversion to nepotism. Notwithstanding his monastic education, he proved himself a statesman, a scholar, an amateur of physical science, and an accomplished man of the world." The present striking binding suggests that he was also a bibliophile of discriminating taste. (Inventory #: ST15677)
$20280.00 add to cart or Buy Direct from
Phillip J. Pirages Fine Books
Share this item