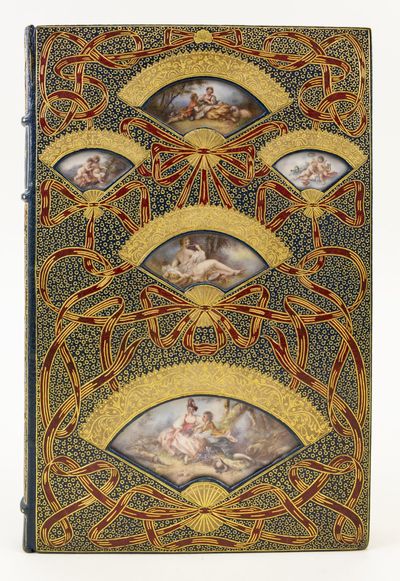 by (BINDINGS - COSWAY). UZANNE, OCTAVE
London: J. C. Nimmo & Bain, 1884. First Edition in English. 263 x 170 mm. (10 3/8 x 6 5/8"). 3 p.l. (including half title), 143, [1] pp. First Edition in English. BREATHTAKING CERULEAN BLUE CRUSHED MOROCCO COSWAY BINDING, ELABORATELY GILT AND INLAID, BY RIVIERE & SON AFTER DESIGNS BY J. H. STONEHOUSE (stamp-signed in gilt on front turn-in and free endleaf), COVERS stippled with tiny daisy-like circlets and gilt dots, FEATURING 10 FAN-SHAPED MINIATURES ON IVORY UNDER GLASS PAINTED BY MISS C. B. CURRIE WITH SCENES IN THE ROCOCO STYLE (one large fan in the lower third of the board with various smaller fans arranged in a diamond shape above it), each fan topped with an inlaid ivory-colored morocco band with delicately tooled gilt designs and with a similar inlaid morocco handle in a clamshell shape, these handles connected by swirling inlaid red morocco ribbons highlighted with gold; three raised bands, one long and one short spine compartment similarly tooled and inlaid with looping red ribbons, turn-ins with gilt frame of dotted and plain rules, ornaments of Cupid at corners, honey brown watered silk endleaves, top edge gilt (invisible repair along top inch of front joint). In a fine cognac brown morocco pull-off box. Text within decorative frames, title vignette and 63 VIGNETTES BY PAUL AVRIL, printed in black, blue, pink, sanguine, and green. Verso of front free endpaper with engraved lily bookplate (of Lily Safra?); front flyleaf with evidence of bookplate removal. A breath of rubbing to one corner, a couple of leaves with faint offsetting from illustrations, but AN OUTSTANDING COPY, the text clean and fresh with ample margins, and the binding absolutely sparkling. Splendidly bound by the masters of the Cosway binding--Riviere, Stonehouse, and Currie--this is a charming study of the fan and its use in flirtation, with delightful illustrations. It opens with a quotation that sets the tone--"The fan of a beauty is the scepter of the world"--and proceeds to study the feminine use of the fan in cultures from China and Japan to ancient Egypt and Rome, up to the Belle Époque and Uzanne's Paris. For the present copy of the book, Stonehouse has designed a binding, brilliantly executed by Miss Currie and Riviere, that perfectly captures that sentiment. On our binding's inlaid fans, Miss Currie has employed a Rococo style and palette to produce endearing courtship scenes in the manner of Watteau, and more voluptuous nudes reminiscent of Fragonard and Boucher. The "Cosway" style of binding, with painted miniatures inlaid in handsome morocco, apparently originated with the London bookselling firm of Henry Sotheran about 1909, the year G. C. Williamson's book entitled "Richard Cosway" was remaindered by Sotheran and presumably given this special decorative treatment. The name "Cosway" then was used to describe any book so treated, whatever its subject. The finest miniatures on Cosway bindings were executed by Caroline Billin Currie (1849-1940), who is known to have created such paintings for Sotheran's from 1910 until her death, usually (as here) from designs by J. H. Stonehouse for bindings executed by Riviere. In the early years of her career, Currie primarily did portraits, usually of the author of the work or a leading character in the novel, but as she reached the height of her powers, she began to do scenes, sometimes emulating the style of other artists, as she has so successfully done in the Rococo vignettes here. The opulence displayed in the binding and in the subjects of its miniatures is also continued in the beautifully printed and illustrated contents. For decoration of the present work, as well as for others on feminine adornment (see Ray 287-88), Uzanne collaborated with Paul Avril (1849-1928), whose witty, ingenious illustrations merge with and overlap the text in an unusual but ultimately successful manner. Ray says that Avril's decorations help to make our volume "an elegant pastiche of rococo bookmaking, exactly to the taste of bibliophiles of [the] day." In addition to producing a number of books like this one, on the foibles of society, Uzanne (1852-1931) also wrote biographies and books about books, including significant works on bookbinding. He would certainly have appreciated the binding here, which is both an interpretation of and a tribute to his work on feminine beauty. This item was once in the magnificent collection of Cosway bindings assembled by Lily and Edmond Safra, and appeared as lot 424 in their 2011 sale at Christie's, New York, where it fetched an all-in price of $74,500. (Inventory #: ST15942)
$57200.00 add to cart or Buy Direct from
Phillip J. Pirages Fine Books
Share this item