Getting Our Thing Together 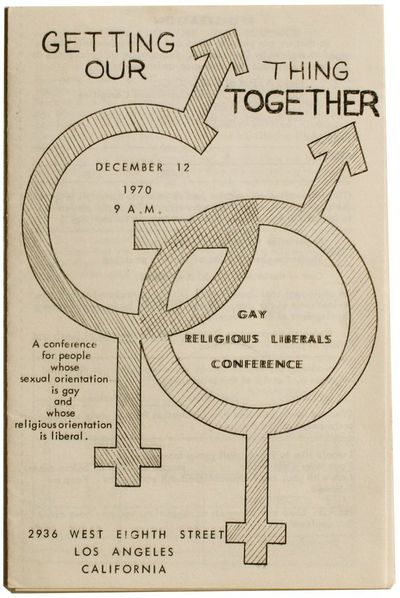 Los Angeles: N.P., 1970. Near fine. 8½" x 5½". Two unstitched leaves, folded. pp. [1], 2-8. Near fine. This brochure advertised the Gay Religious Liberals Conference that was held at the First Unitarian Church of Los Angeles on December 12, 1970. It was publicized as a "conference for people whose sexual orientation is gay and whose religious orientation is liberal." It was the brainchild of Reverend Richard Nash, a Unitarian minister and Floyd Hof, also a Unitarian who later published a gay services guide for Los Angeles. Nash wrote a resolution that condemned discrimination against homosexuals and bisexuals that was passed at the General Assembly of the Unitarian Universalist Association just six months earlier. Despite adoption of the resolution at the General Assembly, the UU church in which it was held would not endorse them, as witnessed by this disclaimer in the brochure: "Since there is diversity of opinions on the subject of homosexuality, the church does not sponsor the Conference of Gay Religious Liberals. The planners of the conference have come to a mutual agreement with the Board of Trustees regarding the use of these facilities for this Gay Religious Liberals Conference to be held on December 12. The Conference Committee wishes to make it clear that use of the Church facilities does not imply church endorsement." This publication provided a registration form to send to the committee, a map of the area around the First Unitarian Church, and a "Call to the Conference," explaining the purpose of this gathering: "To test whether the time is ripe for people who are both religious liberals and gay to come together." The agenda for the day's events was followed by a detailed listing of the 18 workshops which included, "Homosexuality: Sickness or Alternate Lifestyle", "Bisexuality, Concerns of Lesbians" and "Heterosexually married Homosexuals" Nash, along with Elgin Blair, founded the UU Gay Caucus the following year, with the goal of creating an Office of Gay Affairs. General Assemblies in 1973 and 1974 created that office which exists today as LGBTQ Ministries. A rare document from an important and underappreciated event. None located on OCLC. (Inventory #: 3478)
$350.00 add to cart or Buy Direct from
Langdon Manor Books
Share this item