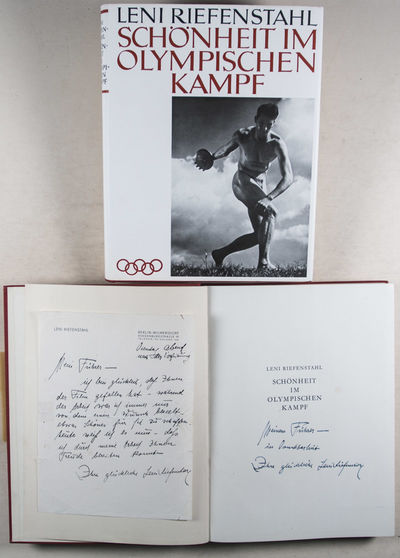 by Riefenstahl, Leni
Berlin: Im Deutschen Verlag, 1937. First edition. Hardcover. From Hitler's personal library. 4to. 281pp. Copper cloth with gold decoration and gold lettering on cover and spine, photographic dust jacket & glassine in original stamped publisher's cardboard slipcase. "Riefenstahl" stamped near lower edge of slipcase, as issued. Inscribed on half-title page by Riefenstahl to Hitler: "Meinem Führer in Dankbarkeit - Ihre glückliche Leni Riefenstahl." (To my Führer - with joyful gratitude, your Leni Riefenstahl). Seminal work in the history of sports by the controversial Leni Riefenstahl (1902-2003). Profusely illustrated with annotated reproductions in photogravure. The photographs were taken from her groundbreaking film "Olympia". Hitler invited Riefenstahl to film the 1936 Olympic Games. The result was Olympia, which according to Riefenstahl has been commissioned by the International Olympic Committee. The film has since been widely noted for its technical and aesthetic achievements. Although Josef Goebbels told Riefenstahl to ignore non-Aryan athletes, she filmed and photographed (as seen in this work) competitors of all races, including African-American Jesse Owens. Includes two photos of Hitler, one as the German team enters the stadium, the other with Reichssportführer Hans von Tschammer und Osten. Foreword by Riefenstahl. Captions in German, French, English, Spanish and Italian. The last 32 pages show Riefenstahl and her crew during filming and in post production. Slight foxing on fore-page edge. 1/8 on top rear of glassine missing, parts of edges on glassine chipped. Minor chipping on head and tail of spine on dj. One-inch of flap on slipcase missing. Tight copy with slipcase and glassine in good, dj and book in near fine condition. UNIQUE PRESENTATION COPY TO HITLER of the most important photographic account of the 1936 Summer Olympics. [WITH] Letter from Leni Riefenstahl, written to Adolf Hitler on the evening after the premiere of her film "Schönheit im olympischen Kampf." "Mein Führer - I am delighted that you liked my film. - during the filming I always was consumed by this one wish - to produce something beautiful for you. Today I know - that I was able to give you joy through my work Your felicitous Leni Riefenstahl" Berlin-Wilmersdorf Hindenburgstrasse 97 Tel N : UHLAND 1456. (Inventory #: 20405)
$125000.00 add to cart or Buy Direct from
Eric Chaim Kline Bookseller
Share this item

UFA , 1931
(click for more details about Photo Album of Stills From the Films, "Le Chemin du Paradis" (The Road to Paradise) and "Le Congres S'amuse" (The Congress is Amused))