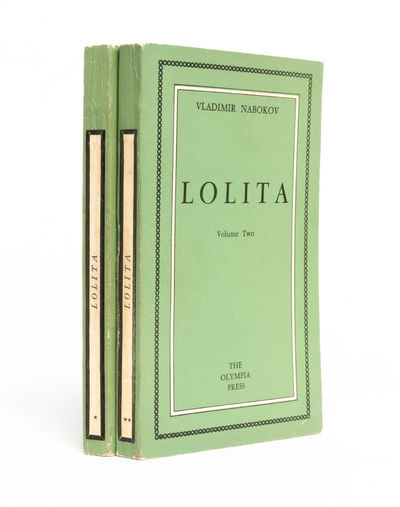 by Nabokov, Vladimir
Paris: The Olympia Press, 1955. First Edition. Fine. True first issue of both volumes with the price of 900 Francs printed on the back of each cover and no overstamp or other price defacement. Volume one is in about Fine condition with a faint crease down the front wrap. Volume two is Fine with just trivial wear. Rare to find such a pleasing pair. This controversial novel is frequently on the list of top books from the past century. Originally released in France because American publishers were wary of such "obscene" material, Lolita tangles sexual taboo and violence with incredibly seductive prose. "Shocking is the reaction the author somehow manages to elicit from his readers: empathy. Readers always read, I think, out of a tremendous curiosity about other human beings, we're looking for another soul on the page, and that's what Nabokov has so fearlessly, so complexly, so gorgeously given us. In a lesser writer's hands, we could easily dismiss Mr. Humbert as a monster, but Nabokov denies us that all-too comfortable option. Even if we would never condone his vain and deadly infatuation, we understand it. We're complicit in his sins, and our complicity is seductive and terrifying" (Johnston). Fine. (Inventory #: 3274)
$7500.00 add to cart or Buy Direct from
Whitmore Rare Books
Share this item