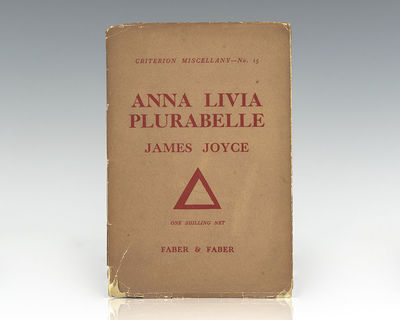 by Joyce, James
London: Faber & Faber, 1930. First edition, third impression of the centerpiece and segment of Finnegans Wake. Octavo, original wrappers. Very good in a very good dust jacket. Responding to critics who accused him of writing off the cuff, Joyce claimed to have spent 1200 hours composing this integral part of his Work in Progress, later published as Finnegans Wake. He incorporated nearly 350 river names into the text and wrought perhaps the most lyrical of his published works. "He was prepared, he said, 'to stake everything' on this section of his book..." (Ellman, 598). (Inventory #: 109988)
$100.00 add to cart or Buy Direct from
Raptis Rare Books
Share this item