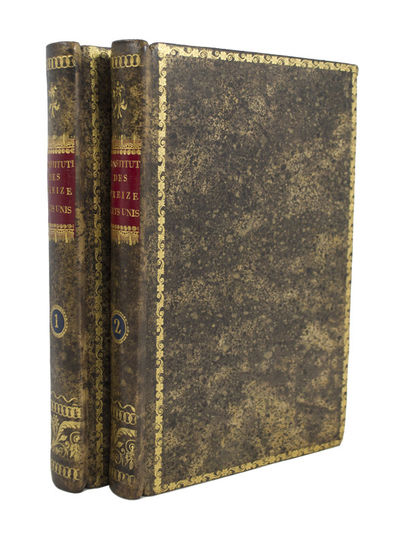 by FRANKLIN, Benjamin
The First French Edition of the United States Constitution [FRANKLIN, Benjamin]. [U.S. Constitution]. Constitutions des Treize Etats-Unis de l'Amerique. Nouvelle Edition. Paris: [No publisher], 1792. First French edition of the 1787 U.S. Federal Constitution, printed with the second French edition of the constitutions of the thirteen states. This edition also includes the Declaration of Independence, Articles of Confederation, and the treaties between the United States and France, the Low Countries, and Sweden. This 1792 edition in two volumes is significant for including the text of the Federal Constitution as well as the Bill of Rights (using the twelve amendments proposed to the first Congress, only ten of which were passed). Translated by the Duc de la Rochefoucauld. Two octavo volumes (7 5/8 x 4 3/4 inches; 194 x 120 mm). [2, blank], [4], 324, [2, blank]; [1]-317, [1, blank] pp. Full mottled sheep. It is difficult to date the binding but it looks to be it's first binding and the book is unread. Boards tooled in gilt. Each volume stamped in gilt with red morocco spine label, and small blue morocco volume number label, lettered in gilt. Board edges tooled in gilt. Marbled endpapers. All edges marbled. Previous owner's bookplate on front pastedown of both volumes. About fine. "The original French edition of the state constitutions was inspired by Franklin and appeared in 1783, and translated by the Duc de la Rochefoucauld, at Franklin's suggestion. The date of this edition of the American constitutions is significant, coming in the midst of the French Revolution, and at a point when the French revolutionaries were drafting their own constitution. This edition was probably created to aid in that project." (National Book Auctions). "In 1783, La Rochefoucauld finally published under his own name a translation of the American founding documents with the title Constitutions des treize Etats-Unis de l'AmÈrique . This book, which had been revised by Franklin, provided for the first time the complete translations of all state constitutions as well as a translation of the declaration, and it seems to have been the main source for the members of the National Assembly." (French Translations and Reception of the Declaration of Independence. By Elise Marienstras and Naomi Wulf) Howes. Sabin 16120. Streeter. HBS 68285. $5,000 (Inventory #: 68285)
$5,000.00 add to cart Available from
Heritage Book Shop
Share this item