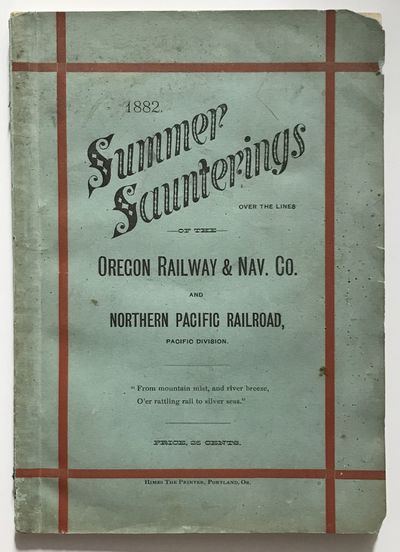 by [Northern Pacific Railroad]
Portland, Or: George H. Himes, 1882. About very good.. 32,[8]pp., plus photograph frontispiece. Original printed wrappers. Spine ends chipped; some light dust soiling and wear to wraps. Slight fading to frontispiece photo, but a clear image. Light even tanning internally; three leaves with small patches of damp staining. A scarce 1882 promotional for potential excursions from Portland, Oregon, published in conjunction by the Northern Pacific Railroad and the Oregon Railway & Navigation Company. The work is illustrated with a real photograph of the Multnomah Falls, east of the city on the Columbia River. The text prints itineraries for ten trips from Portland in the Pacific Northwest, to the Cascades, the Dalles, Seattle, Tacoma, Olympia, Ilwaco, and even Alaska, almost all via the steamers of the Oregon Railway & Navigation Company. The final four leaves of text contain numerous illustrated advertisements for Portland businesses. The frontispiece photograph of the Multnomah Falls is credited in print to Issac Grundy Davidson. "One of the Northwest's premier photographers, Davidson published an extensive series of scenic photographs covering many aspects of life and scenes throughout Oregon, Washington, and Alaska. He operated portrait studios, a traveling gallery, and contracted with the Northern Pacific Railroad.... A keen businessman who produced the finest photographic record of Oregon during the 1870s-80s" - Mautz. An excellent example of the collaboration between a pre-eminent photographer of the Pacific Northwest and the Northern Pacific Railroad, as well as an unusual and scarce specimen of a rail and river travel promotional illustrated with a real photographic print. (Inventory #: 1204)
$1,650.00 add to cart Available from
McBride Rare Books
Share this item