Before the Commissioner General of Immigration, Bureau of Immigration, Department of Commerce and Labor. In the Matter of the Application of Sunouchi Kazunobu, a Japanese Alien for Admission into the United States... [caption title] 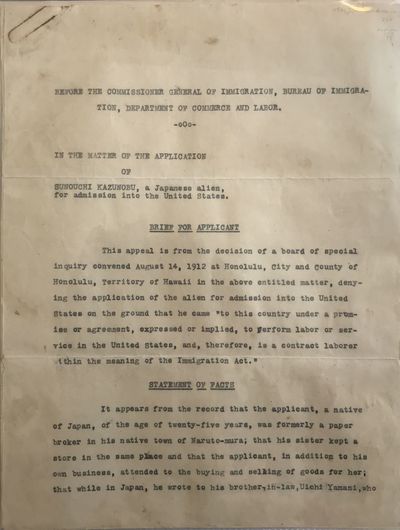 by [Japanese Americana]. Sunouichi, Kazunobu
Honolulu, 1912. About very good.. [11] mimeographed typescript leaves. Folio. Duplicated on thin paper. Previously folded; some oxidization at upper corners of first and final leaves where formerly paper clipped. Contemporary docketing on blank verso of final leaf. Minor loss to final two leaves, slightly affecting text. Moderate, even tanning. A mimeograph copy of a legal appeal relating to the 1912 immigration application of Kazunobu Sunouchi, a Japanese paper dealer and brother-in-law of a noted Honolulu merchant and real estate developer, Uichi Yamane. Sunouchi's application was initially denied, but this statement of facts in the appeal shows the willful ignorance and prejudice of the immigration officer who processed his entry. The officer, one Inspector Farmar, repeatedly questions the offer of initial work and residence that Sunouchi received from his sister and brother-in-law, confusing this offer with Sunouchi's stated eventual goal of opening his own store in Hawaii, with the predictable result that the inspector not only thought that he was being lied to, but also believed, in the words of the lawyers for the appellant, that, "The dignity of the United States officer was being impeached by a trifling miserable Japanese storekeeper and in the colloquial of the street told him not to get 'fresh.'" The appeal was ultimately successful, arguing that while the recent immigration law of 1910 prohibited contract laborers with unconfirmed offers or promises of work being admitted to the country, Sunouchi was not a contract laborer and furthermore had a decidedly firm job offer from his family. After being admitted to the country, Sunouchi operated the General Merchandise Dry Goods store in King Street in Honolulu for many years, and his sons served honorably in World War II. A fascinating document of the legal bureaucracy surrounding Pacific immigration in the early 20th century. (Inventory #: 1196)
$850.00 add to cart Available from
McBride Rare Books
Share this item