Einstein Plans Visit to his Son, and Compares Science to the Search for Four Leaf Clovers 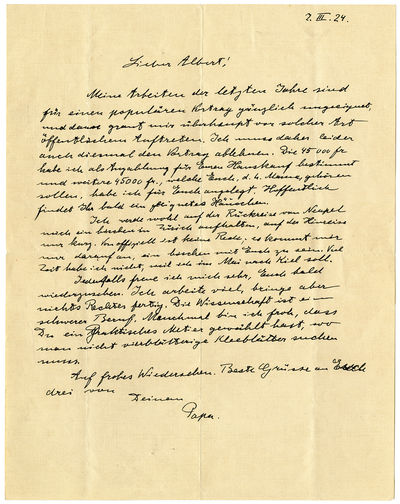 by ALBERT EINSTEIN
"I'm working a lot but not managing to come up with the real thing. Science is a difficult profession. Sometimes I'm glad that you chose a practical vocation, where one doesn't have to search for four-leaf clovers." ALBERT EINSTEIN.
Autograph Letter Signed ("Papa") to his son Hans Albert Einstein, March 7, 1924, [Berlin, Germany]. In German. 1 p.

My research projects of the past few years are completely inappropriate for a popular lecture, and then, I generally dread public appearances of such a kind. That's why I unfortunately have to decline the talk this time, too. The Fr 45,000 I designated for the down payment of the house purchase; and I invested another Fr 45,000, which is supposed to belong to you, that is, Mama. I hope you'll find a suitable little home.

I'm probably going to be staying in Zurich for a bit on the trip back from Naples; on the trip there, only briefly. There's no question of it being official; the main thing for me is to be with you for a while. I don't have much time because I'm supposed to go to Kiel in May.

In any case I'm very happy about seeing you all again soon. I'm working a lot but not managing to come up with the real thing. Science is a difficult profession. Sometimes I'm glad that you chose a practical vocation, where one doesn't have to search for four-leaf clovers.

Looking forward to a happy reunion! Best regards to the three of you, from your

Einstein's Theory of Relativity, published in 1915, describes gravity as a curved geometric property of spacetime. Though E=mc2 captures the theory for which he is most remembered, he never won the Nobel Prize in Physics. Rather, in 1922, he won for his 1905 explanation of the photoelectric effect.

In 1914, Albert and Mileva Marić-Einstein separated, and she and their sons returned to Zurich. When they divorced in 1919, they agreed that any Nobel Prize money he might win would go to Mileva for the children. He won the Nobel Prize for Physics in 1922.

In May 1924, two months after this letter, Marić purchased a building in Zurich, and moved into the third floor apartment. In 1930, she purchased two more buildings, but when the worldwide economic crisis reached Switzerland, many tenants could not afford their rent; she lost the two additional buildings to foreclosure in 1936. Einstein had invested the remaining prize money in America in Marić's name. He lost much of that due to the Great Depression, but he ultimately paid Marić more than he received from the prize.

Einstein also mentions to his nineteen-year-old son his plans to travel to Naples in May. He would attend the fifth International Congress of Philosophy, with his theory of relativity scheduled to be "an object of particular discussion." First organized in 1900, the Congress was a global meeting held every few years under the auspices of the International Federation of Philosophical Societies. It was interrupted by both World Wars, but reconvened in 1948 and has been held every five years since in locations throughout the world.

Einstein also planned to go to Kiel, Germany, to stay and work with Hermann Anschütz-Kaempfe (1872-1931), a German art historian and inventor. Kaempfe pioneered gyro compasses for ships and submarines.

From the 1920s until his death in 1955, the most elusive clover for which Einstein searched was a unified field theory. Einstein tried to meld together general relativity and electromagnetism. This would describe a single field in which all forces are mediated and the properties of all particles could be deduced.

Albert Einstein (1879-1955) was born in the Kingdom of Wurttemberg in the German Empire to non-observant Ashkenazi Jewish parents. In 1894, the family moved to Italy. Einstein graduated from the Swiss Federal Polytechnic in Zürich in 1900. In 1903, he married Mileva Marić (1875-1948), with whom he had two sons. In 1905, he received a Ph.D. from the University of Zürich. From 1908 to 1932, he taught at a series of universities in Switzerland, the Austrian Empire, and the German Empire. As a theoretical physicist, he published ground-breaking papers as early as 1905 and developed the theory of relativity including the mass–energy equivalence formula, E=mc2. Albert and Mileva divorced in 1919. That same year, he married Elsa Löwenthal. In 1922, he received the Nobel Prize in Physics for the discovery of the photoelectric effect. In January 1933, when Adolph Hitler came to power, Einstein was visiting the U.S. and remained here, In 1939, he signed a letter to President Franklin D. Roosevelt warning that Germany could develop a nuclear bomb, thus inspiring the "Manhattan project." He became a U.S. citizen in 1940. After the war he became known for efforts to further world peace. At the Institute for Advanced Study in Princeton, N.J., from 1933 until his death in 1955, he worked to develop a unified field theory and to refute the accepted interpretation of quantum physics. Considered the father of modern physics and one of the most prolific intellects of history, Einstein published more than 300 scientific papers and over 150 non-scientific works.

Hans Albert Einstein (1904-1973) was born in Bern, Switzerland, to Albert Einstein and Mileva Marić. Hans followed both parents in studying at ETH, the Swiss Federal Institute of Technology in Zurich, graduating with a degree in civil engineering in 1926. In 1927, he married Frieda Knecht, and they had four children, two of whom died very young. In 1936, Hans earned a doctor of technical science degree. At his father's advice, he left Switzerland in 1938 to escape the Nazi threat. He settled in Greenville, South Carolina, and worked for the U.S. Department of Agriculture, studying sediment transport. In 1943, he transferred to the California Institute of Technology, and in 1947, he accepted a position teaching hydraulic engineering at the University of California, Berkeley. He became a full professor and eventually professor emeritus, winning several research awards and fellowships. (Inventory #: 26006)
$12,500.00 add to cart Available from Seth Kaller
Share this item