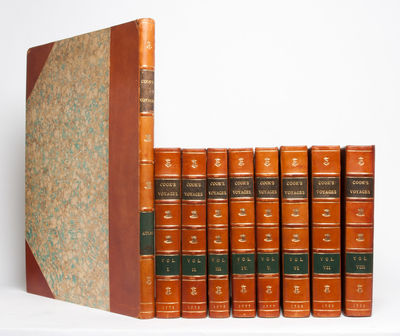 by Cook, James; John Hawkesworth
London: W. Strahan and T. Cadell, 1785. Second edition, First edition, Second edition. Second edition of the 1773 Hawkesworth edition, complete with the "directions for placing the cuts" and The Chart of the Strait of Magellan, which are sometimes lacking. This edition includes the Preface to the Second edition with Hawkesworth's famous rebuttal to Alexander Dalrymple. Three quarto volumes (284 x 227 mm) bound in uniform contemporary calf, expertly rebacked; collating: [xx], xxxvi, [iv, directions for cuts], 456; xiv, 410; 395. Complete with 21 plates and charts in volume 1, 22 in volume 2 and 9 in volume 3, most of which are folding. A Very Good set. Internal contents are generally in excellent shape; a few repairs the folding plates, minor foxing, but on the whole an attractive set.

First edition of A Voyage Towards the South Pole. Two quarto volumes (291 x 230 mm) bound in contemporary calf, expertly rebacked; collating: xl, 378; [viii], 396. Complete with 37 plates and charts in volume 1 (including the frontis portrait of Cook), and 27 in volume 2 (including frontis), plus the folding table at p. 364. Internal contents are generally in excellent condition, although with some minor browning to plates or adjacent leaves.

Second edition of A Voyage to the Pacific Ocean, with the medallion on the title page of each volume. Three quarto volumes (296 x 234), bound in contemporary calf, expertly rebacked; collating: [x], xcvi, 421; [xiv], 548; [xiv], 556. Complete with 11 plates and charts in volume 1 (including frontis), 10 in volume 2 and 6 in volume 3, plus a folding table at p. 528. Volume one has two plates not called for, apparently proof plates of "A Man of Van Diemen's Land" and "A Woman of Van Diemen's Land." Internal contents generally in excellent shape. On the whole a lovely set. With the Atlas volume (527 x 400 mm): containing 63 plates, complete but for the "Death of Cook" plate, which is only bound into some sets. Atlas volume uniformly bound to style with leather spine over marbled paper boards. Internally the plates are generally clean with only a bit of marginal foxing (much nicer than typically found).

"In his three voyages to the Pacific, Cook disproved the existence of a great southern continent, completed the outlines of Australia and New Zealand, charted the Society Islands, the New Hebrides, New Caledonia, and the Hawaiian Islands, and depicted accurately for the first time the north-west coast of America, leaving no major discoveries for his successors. In addition the scientific discoveries in the fields of natural history and ethnology were considerable and the drawings made by the artists were of great significance" (ODNB). On the heels of exploration came imperial exploitation. The Cook expeditions' mapping efforts enabled the British Empire to move safely and efficiently through the oceans in order to establish a world-wide system of economic and cultural control.