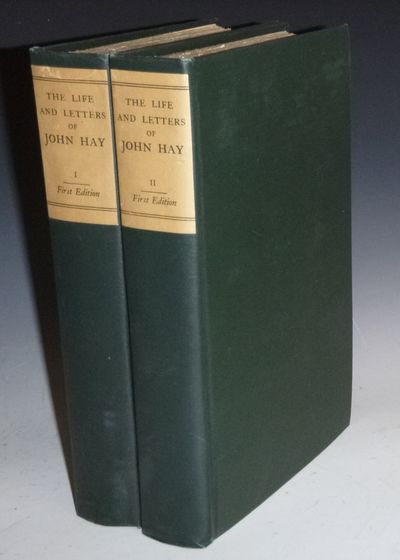 by Thayer, William Roscoe
Boston: Harcourt, Brace, 1915. First Edition. Octavo. Henry Cabot Lodge's copies both with his bookplate. In two volumes, 456pp., and 448pp. uncut. These copies issued in an edition of only 300 copies. Whether it is his work as one of Lincoln's secretaries during the Civil War or his ambassadorship to England or his remarkable work as Secretary of State under McKinley, one thing is certain, he was one of the greatest aids to American policy at the turn of the 19th century. Queen Victoria considered him the best American she had known. The bookplate of Lodge has the Latin spero infestus metuo secundis (the mind of man is ignorant of fate). Bookseller's label of Charles E. Lauriat co, Importers & Booksellers, 385 Wash'n St, Boston. A highlight for the collector of powerful Americans and their influence around the world. A near fine set bound in publisher's dark green-black cloth, paper spine labels lettered in black. A handsome set housed in publisher's slipcase with a few chips and splits. (Inventory #: 027554)
$450.00 add to cart or Buy Direct from
ALCUIN BOOKS, ABAA
Share this item