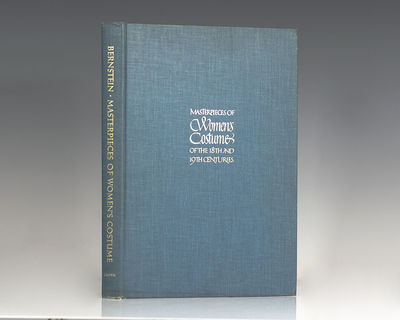 by Bernstein, Aline
New York: Crown Publishers, Inc, 1959. First edition of Aline Bernstein's great work on the history of costume design, published posthumously. Quarto, original cloth, illustrated with 32 color plates and 51 correlated line drawings. In fine condition. From the library of actress Vivien Leigh. American set and costume designer Aline Bernstein began her career at the Neighborhood Playhouse on the Lower East Side and designed the sets and costumes for 51 productions throughout her career. She won a Tony in 1950 for her costume designs for the 1949 production of Regina with music and libretto written by Marc Blitzstein. Bernstein is remembered as the lover, patron, and muse of novelist Thomas Wolfe who immortalized her as the character Esther Jack in his novels Of Time and the River, The Web and the Rock, You Can't Go Home Again, and The Good Child's River. (Inventory #: 110285)
$400.00 add to cart or Buy Direct from
Raptis Rare Books
Share this item