Dombey and Son, in the Original Monthly Parts 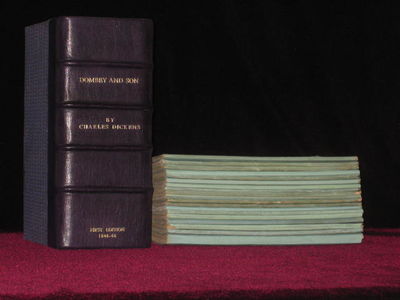 by Dickens, Charles
London: October1846 - April 1848: Bradbury and Evans. First Edition. 20 parts in 19, original printed wrappers. The present set has ALL the correct wrappers and ALL the ads called for by Hatton & Cleaver, except for the scarce Letts, Son & Steer ad in parts X and XI, and the Gilbert's Dictionary ad in part IX. Part VIII is partly unopened. First issue of text, with the word "Delight" instead of "Joy" mentioned twice on page 284, with "Capatin" in the last line of page 324, part XI and the word "if" is absent in part XIV, page 426, line 9 (page number is present on page 431). Part XIX/XX with first issue title page, showing Captain Cuttle's hook on his left arm and with the 8 line errata. Letts, Son & Steer ad in part XV, with 6 diary specimens. Plates are very good to fine, with light edge toning to a few. Booksellers' ticket on front wrap of part X. Spines are expertly renewed on some parts. Light soiling to wraps of some parts; faint owner name on front wrap of part XII. There are a couple of "firsts" in Dombey and Son: the plate "On the Dark Road" in part XVIII is the first of what became known as the "dark plates" - also this is the first appearance of the "horizontal plates" on which the subject is rotated 90 degrees. Altogether a superior set, appealing to the eye and lacking just three ads. Housed in a handsome quarter-leather slipcase, with chemise. Armorial bookplate on chemise and inside the slipcase. Hatton & Cleaver, pp. 227-250. (Inventory #: 08984)
$3,500.00 add to cart or Buy Direct from
Charles Parkhurst Books, Inc.
Share this item
Charles Parkhurst Rare Books, Inc.
Offered by

Shipping costs are extra and will be billed at cost according to customer's shipping preference with tracking availability. For all European countries, please provide a phone number. If by surface, please allow sufficient travel time for arrival. For approximate shipping cost by weight, destination and approximate travel time please contact us. All items are subject to prior sale. If you are interested in an item, we encourage you to inquire promptly. Personal checks must clear prior to shipment. All items sent on approval and have a ten day return privilege for any reason. Please notify us prior to returning. All returns must be properly packaged and insured. All items must be returned in same condition as sent.
More from this seller

by Hemingway, Ernest. (SIGNED By Publisher)

New York : Charles Scribner's Sons , 1899
(click for more details about The Rough Riders)
View all from this seller>