THE CHEAP DETECTIVE ORIGINAL SCREENPLAY BY... 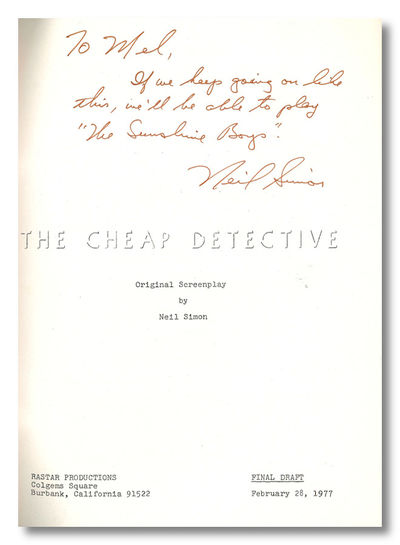 by Simon, Neil [screenwriter]
Burbank: Rastar Productions, 1977. [1],136 leaves. Quarto. Mimeographed typescript, printed on rectos only. Bradbound in mimeographed production company wrappers. A thin, small ink stroke and a few tiny spots on upper wrapper, otherwise about fine. Inscribed on the title-leaf: "To Mel, If we keep on going like this we'll be able to play 'The Sunshine Boys' Neil Simon." The recipient was, in all probability, Mel Traxel, who served as still photographer for this production, as well as three earlier films based on Simon's scripts (including THE SUNSHINE BOYS). Denoted a "final draft" of this original screenplay for Simon's detective parody, directed by Robert Moore, starring Peter Falk and Ann Margaret, and released in 1977. A novelization by Robert Grossbach was published in 1978 as a Warner paperback original, but there was no contemporary publication of Simon's own original work. OCLC locates only one copy of this script (a revised final draft at Michigan State). (Inventory #: WRCLIT83164)
$950.00 add to cart or Buy Direct from
William Reese Co. - Literature
Share this item