Socialism for the Farmer Who Farms the Farms 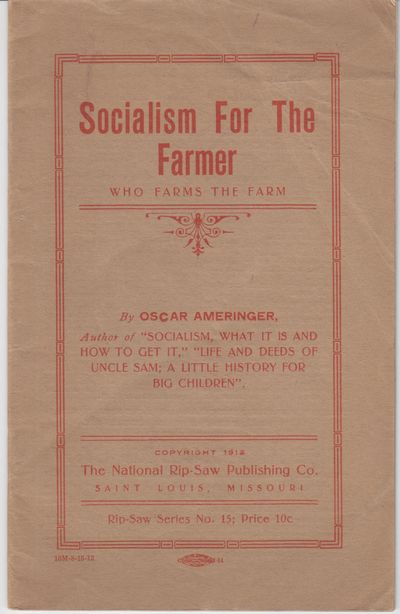 by Ameringer, Oscar
St. Louis: National Rip-Saw. 1912. First Edition; First Printing. Softcover. Wraps, very good with wrinkling to upper right corner of front wrap. National Rip-Saw was published by Kate Richards O'Hare and Frank P. O'Hare, Socialist Party activist who published a newspaper as well as other publications. Kate was imprisoned for making an anti-war speech but she was pardoned before serving much of her 5 year sentence, pardoned by the demands of a wide-spread campaign to set her free.; 8vo 8" - 9" tall; 32 pp . (Inventory #: 30632)
$75.00 add to cart Available from Beasley Books
Share this item

Impenetrability; or The Proper Habit of English

London : Hogarth Press , 1926
(click for more details about Impenetrability; or The Proper Habit of English)

Deya Majorca / London : Seizin Press / Constable , 1935
(click for more details about Progress of Stories)
View all from this seller>