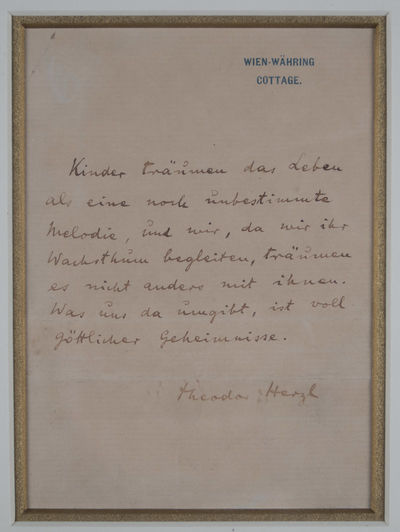 by Herzl, Theodore
Vienna: NP, 1890. Handwritten poem (5 1/2 x 4"), matted under glass in decorative golden frame (13 1/2 x 12"). Wien-Währing Cottage "Kinder träumen das Leben als eine noch unbestimmte Melodie, und wir, da wir ihr Wachstum begleiten, träumen es nicht anders mit ihnen. Was uns da umgibt, ist voll göttlicher Geheimnisse." Signed, Theodor Herzl Children dream life as a still undefined melody, and we, since we accompany their growth, dream it just the same with them. What surrounds us there, is full of devine mystery. Beautiful lines reminiscing the views of children and their positive influence on adults. Considering the letterhead, this poem probably was written after 1892, the year the Vienna district Währing was formed, and before Herzl moved to the Berggasse, where he lived from 1896 to 1898, becoming a neighbor of Sigmund Freud, although the two did not know each other at that time. Theodor Herzl was born in Budapest, Hungary, and devoted himself to a literary career. In 1891, he was appointed Paris correspodent for the Vienna Free Press. The violent anti-Semitism that erupted in France in 1894 as a result of the court martial of the Jewish army officer, Alfred Dreyfus (Dreyfus Affair) deeply affected Herzl. Until that time, he believed that the gradual assimilation of the Jews and Christians was the best solution to anti-Semitism in Europe. Thereafter, Herzl believed that the solution could only be that the Jews became a separate national group with sovereignity over their own territory. Herzl became the founder of modern political Zionism and has bee regarded as one of the greatest influences in the movement that led to the creation of the State of Israel. (Inventory #: 46343)
$3750.00 add to cart or Buy Direct from
Eric Chaim Kline Bookseller
Share this item

UFA , 1931
(click for more details about Photo Album of Stills From the Films, "Le Chemin du Paradis" (The Road to Paradise) and "Le Congres S'amuse" (The Congress is Amused))