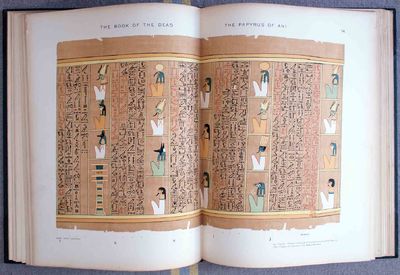 by Budge, Ernest Alfred Wallis.
London: Printed by order of the Trustees, sold at the British Museum, 1894. Second edition. E.A. Wallis Budge acquired the Papyrus of Ani for the British Museum in 1888. Intended as a guide to the afterlife, the scroll was full of its culture's most beautiful prayers and incantations, and was exquisitely decorated. Budge immediately sliced the scroll into 37 pieces and mounted the sections for exposition at the British Museum, where they began to deteriorate under the light. At the same time he commissioned a full-size, full-color facsimile, first published in 1890 and again in 1894, in luxurious elephant folio sheets but without translation or analysis. Budge claimed to "Illustrates the religious views of the wonderful people who more than five thousand years ago proclaimed the resurrection of a spiritual body and the immortality of the soul." Extra shipping charges apply.. Facsimile volume: 54cm; vii pages and 37 double-page chromolithograph plates. Bound in original half black morocco over pebbled boards, ruled in gilt and titled in gilt on spine. Leather and gilding expertly renewed, corners reinforced. A sturdy, clean copy in original binding. (Inventory #: 6190)
$900.00 add to cart Available from
Rodger Friedman Rare Book Studio
Share this item
Rodger Friedman Rare Book Studio
Offered by

Paris : Maurice Darantiere , 1948
(click for more details about Peau d'âne. Conte.)
View all from this seller>